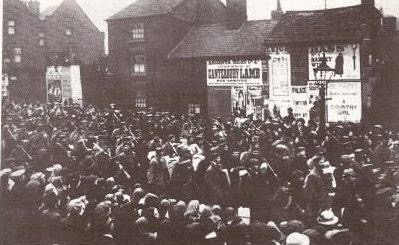 A lasting memorial to mark 100 years since the first prisoners of war (POW) were brought to a camp at Leigh is set to be created.

Now the views of local people are needed to help shape an appropriate memorial.

On 29th January 1915 the first group of German prisoners arrived at Leigh POW camp which was based close to Etherstone Street and Lilford Street, now near Leigh Sports Village.

At the time the camp caused great interest in Leigh and crowds of local people lined the streets to witness the arrival of the POWs.

The POWs stayed at the camp until 1919 although little is known about their time there. Remaining records including newspaper reports and photographs show some of the POWs forming theatre groups, playing sports and card games. Some of them worked at the Partington Steel Works in Irlam.

Around twelve prisoners are believed to have attempted to escape from the camp, one of which ended tragically when one prisoner, Friedrich Wilhelm Karl Schmidt, was shot and killed whilst trying to escape via the roof of the camp.

Friedrich was buried in Leigh Cemetery, as were 12 other prisoners who died from a number of diseases including the influenza epidemic of 1918, heart disease and typhoid fever. An obelisk was erected over the grave with a memorial inscription carved on it by the POWs.

Both the prisoners and the obelisk are no longer in the cemetery – the men who died were moved to German War Graves Cemetery at Cannock Chase – and there are no physical reminders of the camp apart from the cottages the guards used.

The camp was originally built for the Lilford Weaving Company and after the war the camp returned to its original purpose of weaving but it too ceased production in the 1960s and the building is no more.

Now there are plans to mark the centenary of the camp opening with a memorial to be erected close to the site. People’s views are needed on what would be an appropriate memorial.

Hannah Turner, local and family history officer who is working on the project, said: “There are people today in the local area who have had stories passed down through their families about the camp and it still causes great interest today.

“The POWs and the camp have been the subject of plays, a radio documentary and even a book.

“One proposal for the memorial is that a piece of art is created by a local artist and local children but we really need to hear the views of local people.”

A public consultation will take place at Leigh Library on Thursday 29th January at 4pm. There will be an introductory talk about the history of the Leigh POW camp.

Heavy rain washes away track between Manchester and Buxton