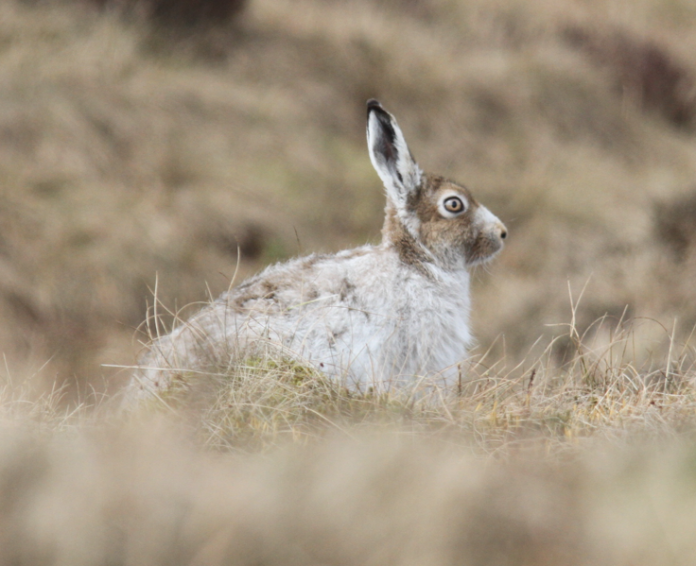 England’s last mountain hare population in the Peak District is now at low densities across most of the uplands, states new research.

Dr Carlos Bedson, lead author of the study, said: “Our findings are deeply concerning. Whilst there are a couple of places where mountain hares are abundant, most of the Peak District hills have very few hares remaining.

“The highest mountain hare densities were in ecologically restored blanket bog, which has benefitted from investment in rewetting, where the natural flow of water is restored by blocking gullies and planting mosses and heather.”

Researchers suggest such interventions, managed by partners including the Moors for the Future Partnership and the National Trust, have contributed to higher plant diversity, providing a better environment for mountain hares.

Chris Dean, Head of Moors for the Future Partnership, said: “While the news is worrying that mountain hares in the Peak District face an uncertain future, this study provides new evidence that our work over the past 20 years has made a positive difference, improving the habitat for this emblematic species, to give it the best chance of survival.”

The study reported fewer mountain hares on land managed for grouse shooting. Such areas are periodically burnt to regenerate young heather for gamebirds. This can provide good conditions for mountain hares in some cases but seems to support fewer numbers than ecologically restored peatlands. There has also been a perceived association between ticks carried by mountain hares and disease in the gamebirds such that in Scotland mountain hares were culled on grouse moors. It is not known to what extent hare culling occurs in the Peak District.

Study collaborator, Dr Neil Reid, Senior Lecturer in Conservation Biology at Queen’s University Belfast, said: “Whilst it’s alarming to learn how few hares remain it’s important to remember that our research also highlights how conservation can, and does, make a difference. In this case, healthier bogs had more hares reflecting the wider benefits of rewetting peatlands. We hope these findings will lead to more rewetting of peatlands in a bid to increase not only hare population but biodiversity more generally.”