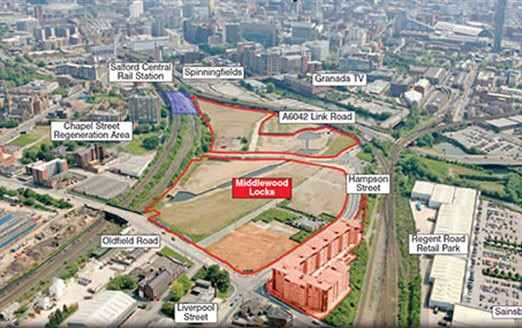 Investment opportunities for Manchester Place, The Mayfield Quarter, Middlewood Locks, St John’s, and The Stockport Exchange were on the agenda for the Chancellor George Osborne showcased a selection of £24 billion worth of investment opportunities in the North of England at an event in Chengdu with senior Chinese investors.

Speaking in the city of Chengdu, the Chancellor said there are unprecedented opportunities for Chinese investment into the Northern Powerhouse as the UK and China enter a golden era of economic cooperation.
Infrastructure and regeneration investment projects such as the Atlantic Gateway – a series of projects connecting the Port of Liverpool to the City of Manchester; and Science Central, a cutting-edge development in the heart of Newcastle, are set out in a new Northern Pitchbook that was presented in Chengdu today.

At the same time, Britain’s great Northern leaders said a new wave of transformational Chinese investment can revolutionise Northern infrastructure.
The Chancellor was joined by a raft of Northern businesses looking to expand their work with China as well as civic leaders from the North including Leader of Cheshire East Council, Michael Jones, Mayor of Liverpool, Joe Anderson, Leader of Sheffield City Council, Julie Dore, Leader of Leeds City Council, Judith Blake, Leader of Manchester City Council, Sir Richard Leese, Leader of Trafford Council, Sean Anstee, and Leader of Newcastle City Council, Nick Forbes.
Manchester Place was an opportunity to deliver three new zones of more than 10,000 homes with a combined value of over £3 billion while Middlewood Locks was positioned as an excellent location at the edge of Manchester city centre and represents an opportunity
to establish a very attractive residential neighbourhood based around a remediated canal basin.

“As we continue to work more closely with China, we have an unprecedented opportunity to secure significant investment into some of our most ambitious projects across our Northern Powerhouse.From Liverpool to Newcastle, we are opening up our doors to investment that will not only help us to grow and create jobs, but will allow us to build infrastructure to rival any region in the world.”

“The involvement of Beijing construction and engineering group at Airport City Manchester, and in a major development in the city centre, shows that there is an open door for Chinese business in the North.There is now an enormous opportunity to work with us on the massive investment in infrastructure we expect to see over the next decade.”

Engels’ Beard sculpture to be unveiled