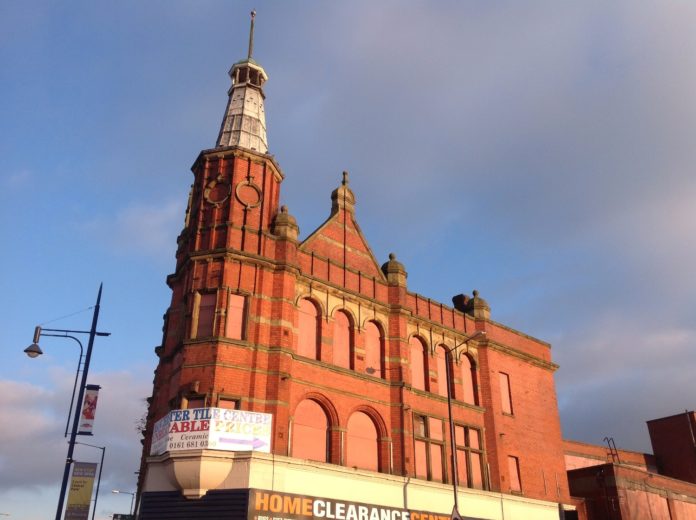 It was once one of the most splendid shops in Manchester but now the future of this Newton Heath building seems destined for demolition after years of neglect.

The former building which housed the Co-op which when opened in the 1890’s was one of the first stores in Manchester to be lit by electricity looks set to be pulled down.

The store has been empty since the late 1960’s, its ground floor occupied by various shops until plans were revealed to turn it into luxury flats.

Work began just over three years ago which included the roof being removed but since then it had been open to the elements and today Manchester Council is in a battle with the developers who now want to level it, to retain at least something of its splendour.

Their planning department have told us that planning permission was granted in April 2008 for the erection of a part ten, part six and part five storey building behind retained facade to form 114 one, two and three bedroom flats, and 568 square metres of floorspace at ground floor level with associated parking and landscaping.

Development commenced on site and planning permission for the development has been kept live. There are however no immediate powers to enforce the completion of the building works.

However the council’s Building Control Service have been regularly monitoring the condition of the building for a number of years.

Following demolition works, the condition of the building has deteriorated and has attracted some anti-social behaviour.

Various assurance, we are told have been given to officers that the developer would demolish the building due to its deteriorating condition.

The developer pursued a notification to demolish the remainder of the Rosedale building in 2019 which was accepted subject to conditions.

However, more recently the developer has informed council officers that, rather than demolish the building, they wish to retain the structure and would begin to strengthen the parts of the building they wished to retain.

There has been no evidence of either demolition or strengthening works at the site to date. The City Council is therefore now pursuing the demolition of the building by way of obtaining an order from the courts, under dangerous building powers, which, if successful could result in the City Council demolishing the building and recovering any associated costs from the owner/developer should they continue to delay in their responsibilities to ensure the building is not an immediate danger.

Manchester’s NOMA back on track in £800m deal.