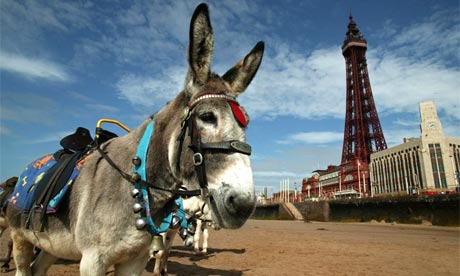 Heading to the seaside? Well it seems that longstanding seaside traditions are fading from modern British holidays, with Punch and Judy, Helter Skelters and sticks of rock on the way out.

A study of 2,000 families explored old and new holiday pastimes and found games like beach cricket and wheelbarrow-racing are in decline.Results showed just a third of families played I-spy on their last family holiday, less than that sat in a deck chair and under four per cent used a beach hut.

The evolution of British holidays, commissioned by Beach Retreats, found that while many traditional activities are in decline, some – digging holes in the sand and exploring rock pools – are timeless.

Smartphones may have all but killed off the postcard as we happily snap 81 photos on average per holiday, with only 30 per cent sending a single postcard while away. Sending three updates to friends and family via Facebook might also be responsible for the postcard decline. The study compared modern parents’ holiday experiences with those they enjoyed as children themselves. It found people were more than twice as likely to send postcards on trips thirty years ago as they are now.

Andrew Easton, business manager for Beach Retreats, said: “The results give an interesting look at which activities are standing the test of time when it comes to how we spend our precious holiday time.

“Being a contemporary beachside holiday letting agency we embrace modern technology in abundance. From breath-taking Instagram photos to Facebook updates and quick tweets – sharing your holiday moments on social media is now an essential part of everyone’s holidays.”

Other results to emerge were that, while 54 per cent of parents enjoyed Punch and Judy shows as children, just 16 per cent of families experience them in modern times. Eating sticks of rock, donkey rides and using deck chairs have also seen a big drop in popularity. Remarkably taking a phone to the beach is more important than a towel for four in ten people nowadays.

And over two thirds (68 per cent) of Brits said they would not be able to fully enjoy a seaside holiday without their mobile phone. One thing technology can never compete with is a good old sea breeze – almost three quarters (73 per cent) said the sea air is what they love most about the seaside.

Andrew Easton, added: “Nothing beats getting out on the beach and breathing in the sea air and so it’s great to see that the sea breeze still rates as the thing people love most about a modern beach holiday.”

While building sandcastles and and tucking into fish and chips haven’t yet lost their charm – and featured high on the list of activities families did on their last British holiday.

Princess Parkway top of the pops in Manchester congestion charts

Get me there by Xmas please