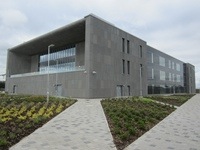 Manchester has a new rail signaling centre which will eventually control large parts of the railway in the north west of England.

Officially opened yesterday, the centre near Ashburys station , is one of twelve which will eventually manage the entire rail network across Britain, replacing more than 800 signal boxes and other operational locations currently used to control trains.

All twelve centres will have more advanced signalling tools and technology that will help reduce delays, improve performance, increase capacity, provide better information to passengers and offer better value for money for passengers and taxpayers.

Sir Richard Leese, leader of Manchester City Council, who opened the centre said: “This new centre will be an important part of a major overhaul of the north west’s rail network, vastly improving the service and making it easier for tens of thousands of people to access jobs in and around Manchester using public transport.”

Later this year the ROC will be home to Network Rail, TransPennine Express and Northern control staff who monitor the operational railway and help to deal with incidents as and when they arise. Working together in the same building as the increasing number of signallers will help the railway industry as a whole react to disruption in a quicker and more efficient way, reducing delays and providing passengers with better, more accurate real time information.

Over the next 20 years all of the railway in the north west of England will be controlled from the ROC, bordered by Crewe to the south, Todmorden in the east, Carlisle in the north and the Welsh border to the west.

When fully operational, up to 400 staff will work from the ROC, operating the railway 24 hours a day.

World War One battle streets to be re-dedicated in Rochdale

Battle over Ordsall Chord is over