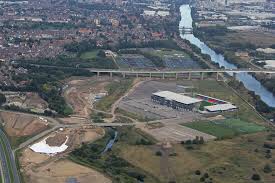 Greene King, the leading pub retailer and brewer behind family pub chain Farmhouse Inns has announced the start of work on a new pub and restaurant, creating 75 new jobs, close to the AJ Bell stadium in Salford.

They become the first tenant to join the £16 million stadium on the development which is being managed by a joint venture company between the Peel Group and Salford City Council (COSCOS).

The stadium, which opened in 2012 was built as the catalyst to regenerate over 36 acres of formerly derelict land now known as Salford Gateway. It aims to create thousands of new jobs and add to Salford’s current building boom.

The site is close to Port Salford, being developed by the Peel Group, which will create a new inland port to be served by water, road and rail bringing over 3,800 permanent jobs to the city.

Salford City Mayor Ian Stewart, said: “Greene King is building on the foundations we laid in 2012 for a successful future for this area.

“This new pub and restaurant will generate permanent jobs when it opens as well as providing new facilities for residents and visitors. It will also be the catalyst for the sale of more land around the AJ Bell Stadium and bringing this former derelict wasteland back to life. I look forward to celebrating this success with a drink in the new pub when it opens later this year.”

Work is expected to start soon on building the 297 cover restaurant which will open in late summer. Covering 1.2 acres, it will offer customers a selection of menus to suit all ages, including a daily carvery, cakes and a selection of real ales.

Sneak preview at the Study- Manchester Museum’s new area for the curious, the makers,...