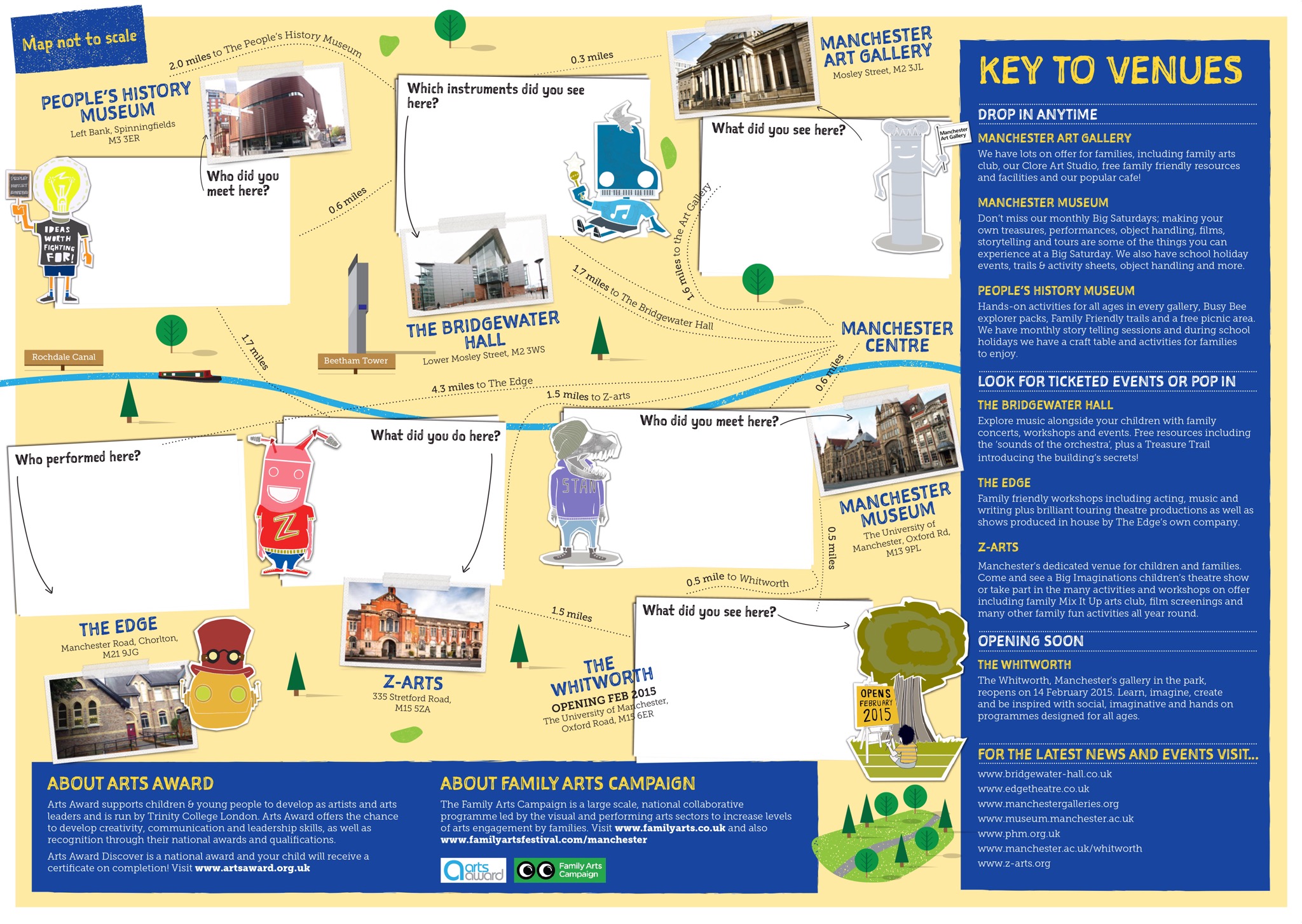 A new map of Manchester has been launched today to help families and young people discover the city’s cultural treasures during half-term.

Trailblazer has been developed and designed by teenagers to showcase the best of the city’s arts venues. The map forms part of the Family Arts Festival, a national celebration of family-friendly cultural events, which runs from 17 October – 2 November 2014.

Young people worked with the venues in the Manchester Family Arts Network to advise on the events and activities that they would like to see and take part in.

They then collaborated with illustrator Stephen Nuttall on designing characters that represented each venue and on putting together a user friendly guide to the city’s arts and cultural venues.

Casey Birks, aged 18 from Chorlton, is one of the young people who worked on the project. He said, “It’s been great fun working on this project and really interesting to find out more about other venues in Manchester that I hadn’t been to before. We’ve put together a map that can help more young people find out what’s going on in Manchester, where and how to get to it. I‘m looking forward to trying out some of the activities at the venues now Trailblazer is up and running.”

There are two versions of Manchester’s Trailblazer map. One is designed for families with younger children, aged between five and eleven years, to complete together, and forms part of an Arts Award activity. The second version is aimed at older children, who could do the trail independently. The aim of both trails is to encourage people to explore their local arts venues, find out what they have to offer and to try out new experiences and destinations.

The maps feature seven of Manchester’s leading arts venues which make up the Manchester Family Arts Network. These are The Bridgewater Hall, The Edge, Manchester Art Gallery, Manchester Museum, People’s History Museum, Whitworth Art Gallery and Z-Arts. Most of the venues are offering free activities for children and young people, which include workshops, exhibitions and performances.

Liz O’Neill, Chief Executive of Z-arts and co-ordinator of the Manchester Family Arts Network, said: “It’s been great to get young people from across Manchester working together and I love what they’ve come up with. The Trailblazer map is a very practical tool for families and young people looking for something to do. Most of our venues are free to enter as well, and easy to get to. I hope people will visit some new places and try something different.”

Children who complete the trail will qualify for an Arts Award which supports them to develop as artists and arts leaders. Arts Award offers the chance to develop creativity, communication and leadership skills, as well as recognition through its national awards and qualifications and is run by Trinity College London.

Ronald continues to arch out across the region

For one night only Manchester’s Trams transformed for artistic showcase