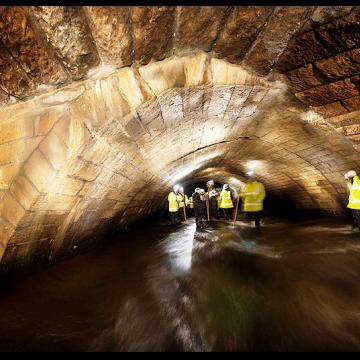 Rochdale’s medieval bridge, which has been hidden from public view for more than a century, is set to be uncovered following the approval of a Heritage Lottery Fund (HLF) grant to reopen the river.

The HLF’s £1.2m grant is a huge boost to the scheme, which is a vital part of Rochdale town centre’s ongoing regeneration.

The project, which is also backed by the Environment Agency and Regional Flood and Coastal Committee with financial support of £1m, will remove two sections of the culvert that covers the river to reveal the stunning 800 year-old bridge, which was hidden from view in 1864.

Aside from a brief period in the early nineties when the river was uncovered for engineering works, no one has glimpsed this unique part of Rochdale’s heritage for over one hundred years.

As well as uncovering and restoring the bridge the project includes measures to enhance the natural heritage of the river by including features that encourage river vegetation and creatures to re-establish themselves.

Sara Hilton, Head of Heritage Lottery Fund North West, said: “Rochdale’s exciting plans to re-open the River Roch will not only reveal the hidden heritage at the heart of the town, but will inspire local people to get involved and support the surrounding natural environment. Running through the heart of the town, the River Roch has played a vital role in Rochdale’s history over the years and this project, made possible thanks to National Lottery players, will ensure that it will again.”

The exposed sections of the river will be located at the junction of Yorkshire Street and the Esplanade.

Rochdale Borough Council Leader, Richard Farnell, said: “This is fantastic news for Rochdale and we’re incredibly pleased that the Heritage Lottery Fund have agreed to support this vital project. We cannot create a better future for Rochdale without honouring its glorious past and this scheme will create a stunning town centre attraction which will be quite unique in the area.”

The Environment Agency, which has also put money into the scheme, welcomed the news, as the river reopening will significantly reduce the flood risk in Rochdale town centre.

The bridge was originally built to transport raw wool from Yorkshire to be processed in Rochdale’s mills. An educational programme has been set up as part of the project to help local people understand the vital role it played in the borough’s history.

Work is set to start as early as February 2015, with the entire scheme due to be completed in the autumn of that year.

Hulme’s Tower blocks to be captured for posterity.