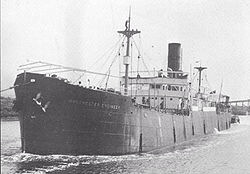 The Manchester liner Manchester Commerce struck a mine in the North channel off the coast of Ireland.

The Captain and thirteen of the crew were drowned , she had left Manchester docks two days previously on route to Montreal.

Thirty of the crew were rescued by the steam trawler City of London and taken to Fleetwood.

Unfortunately owing to the nearby coastguard station not possessing telegraphic communication, it was not possible to circulate the news of the steamship´s loss at once.

As a result of this the loss of the ship was not known to the Admiralty until after a battle squadron had steamed into the minefield, and on the next day the battleship Audacious was lost in the same area through striking a mine.

An eighteen year old girl from Ardwick Nellie Galloway was killed by having her throat cut after returning home from the local picture house. A nineteen year old Henry Brown, whom she had been keeping company with, was arrested.

The death of the painter Sir Francis Powell was announced at the age of eighty two. He had been born in Pendleton, educated in Broughton and had enrolled in Manchester’s School of Art at the age of seventeen.

His paintings were of marine and lake views and in 1857 he went to live in Dunoon in the Clyde estuary. In 1877 he won the Haywood prize for the best watercolour exhibited in Manchester. When he was living in Glasgow in 1878 he became one of the founders of the Royal Scottish Society of Watercolour Painters. He was its first President. Works include Ben Nevis from Locheil, The Channel tug, Loch Corruisk, and The north of Arran. His work is displayed in the Victoria and Albert, in Dundee and Glasgow, in Manchester, and in Portsmouth. Powell was knighted in 1893.

Whitworth and Dunham Massey up for museum of the year award.

The Garden opens at Leftbank, Spinningfields

Three more years of disruption but jobs,homes and business will benefit as Manchester launches...