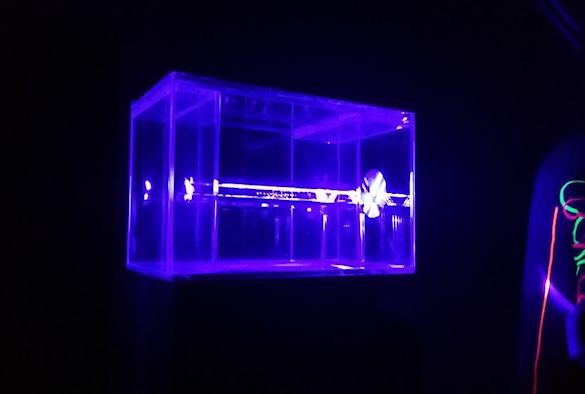 An exhibition exploring the ever-changing limits of science through art opens today at FACT, the Liverpool-based media arts centre.
No Such Thing As Gravity will feature a wide range of works merging art with scientific experiments, new and future technologies, and exploring the borders between life and death, as well as the limitations of our consciousness.
It explores the idea of science being a continuing quest for knowledge, rather than a fixed framework. The exhibition is formed around the areas of science where the absence of established facts leave room for new theories, alternative science, conspiracy theories and irrational beliefs.
As part of the exhibition launch, Liverpool Particle Physicist, Professor Tara Shear will give visitors a tour of the ambitious new exhibition alongside the exhibition’s curator, Dr Rob La Frenais.

Professor Shears said: “The boundary where the frontiers of knowledge give way to the unknown, is one of the most fascinating places there is. It’s a place where facts melt into theories, ideas and supposition, but it’s also a place that scientists spend most of their time exploring. There is so much out there for us to understand.

“And artists approach the same ideas and concepts from a different perspective, and illustrate them in such a captivating and unexpected way. We’re all working to make sense of what’s out there.”