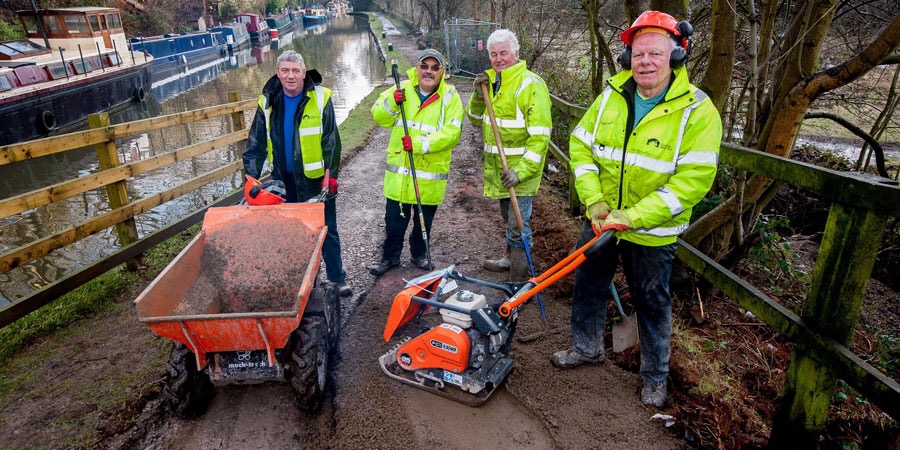 A ‘Herculean’ effort from volunteers has helped to reopen the first stretches of flood damaged towpath along the Rochdale Canal
Volunteers have been out on the Rochdale Canal. They have moved over 200 tonnes of stone and other materials – the weight of 15 double decker buses – to fill holes that were left by flood along the popular towpath through Sowerby Bridge, Hebden Bridge and Todmorden.

In the past week a mile and a half stretch of towpath between locks 7 and 10 has been reopened by the Canal & River Trust with more to come. It is expected that by the end of the week local residents will once again be able to use the towpath all the way from Sowerby Bridge to Hebden Bridge.

Jon Stopp, a lead volunteer with the Canal & River Trust, comments: “The response from the community has been fantastic. The canal is such an important part of life around here and getting the towpaths back open is really important.

“So far volunteers on the Rochdale Canal have contributed over 120 days-worth of hard work since the floods wreaked havoc. Their work fixing and repairing towpaths and clearing thick mud has been Herculean. And it’s not just been residents. We’ve even had volunteers from the local branch of Lloyds and Halifax out helping.”

The work on the Rochdale Canal continues. In the next week, the Trust hopes that work in and around Todmorden will mean that the canal towpath is once again open from there all the way to Manchester. There is also considerable work to do on the canal between Hebden Bridge and Todmorden where the flooded River Calder washed away an entire stretch of canal bank and where hundreds of tonnes of soil, trees and debris slid down the side of the hill and blocked the canal.

Jon continues: “The work on the canal is ongoing and we’ve a working party this Saturday in Sowerby Bridge. All volunteers are welcome: meet at the Wharf at 10.30am. Just bring sturdy footwear, warm clothes and be prepared to get stuck in.

“We want to get the canal and towpath back to its best as quickly as possible so that it can once more be enjoyed by the local community. That’s why we’re asking local people to help where they can and this volunteering day will be a great opportunity for us all to pull together and get things back to normal. We’ve already had lots of fantastic support and we’re very grateful for any help that people can give.”