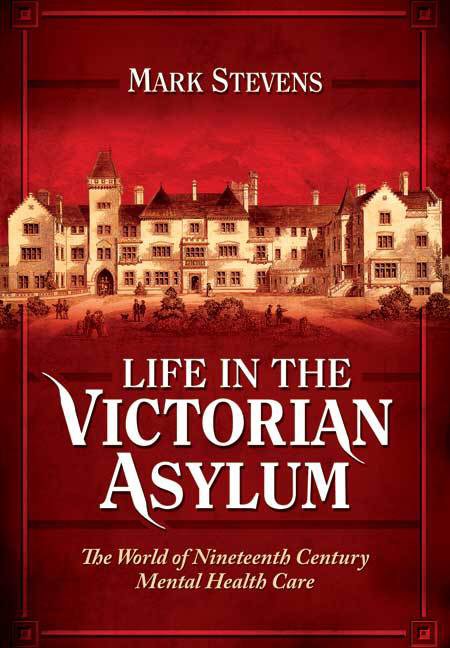 A new book by Mark Stevens Life in the Victorian Asylum reconstructs the lost world of the nineteenth century public asylums. This fresh take on the history of mental health reveals why county asylums were built, the sort of people they housed and the treatments they received, as well as the enduring legacy of these remarkable institutions.

After his highly successful début with Broadmoor Revealed, writer and archivist, Mark Stevens takes us into the forbidding world of the Victorian asylum in his new book, Life in the Victorian Asylum. I thoroughly enjoyed this fascinating book and I’m delighted that Mark agreed to answer some questions about his work:

Throughout your book you stress the positive intentions of the Victorian asylum. To what extent do you think the qualities of ‘kindness, patience and understanding’ underpinned patient care throughout the history of the institution?

Phew – that a tough one to start with.
I think the thing that definitely gets forgotten is that these places were built with good intentions. On the eve of the great Lunacy Acts of 1845, the Victorians found that many people with mental health problems were either in workhouses or prisons. Others were homeless, or were left with volunteer carers, family or friends, without support.

The Victorians thought this was a bad thing and resolved to spend public money doing something about it. They chose to do so by creating asylums. You can argue that was the wrong outcome, but I think that their hearts were in the right place.

Sadly, it is equally true that asylums became part of a custodial system for people who were not mentally ill, but merely did not conform to what society considered to be ‘normal’. The first half of the 20th century was particularly bad for this. I don’t think you can argue that this period saw ‘kindness, patience and understanding’ – rather it saw regulation, segregation and exclusion.

That’s why asylums get such a bad press these days, and why they are a lazy shorthand for ‘the bad old days’ of mental health care. I think that is unfair – the Victorians’ believed just as much in compassion and recovery as we purport to now, and maybe we should recognise that these beliefs began in the asylum.

How has your experience of researching this book changed your personal view of Victorian asylums?

I’m finding it one long and continuous journey. My views shift as regularly as sand dunes on the shore. If I was writing Broadmoor Revealed today, it would be quite different in places, and the same is already true of parts of Life in the Victorian Asylum.
The reason for this is that the research keeps taking me further, beyond the asylum estate and deeper into Victorian society. The complexity of the connections – of the institution itself, of the staff, the patients and their family – keeps changing the context in which I see the asylum. I guess it is like trying to understand a hospital today – you can’t do it justice unless you also understand our welfare system, our economy, our politics and the way that people live their lives. That all makes it very hard to come to a definitive opinion.

Naturally I was very interested in the criminal inmates. In your research, did you find that they were treated any differently from other patients?

The ‘criminal lunatics’ who were admitted to local asylums were petty thieves and rogues, in the main. I’ve not yet found any evidence that the other patients singled them out in any way, and they were accommodated in the same ward system, placed with patients who had never offended by who exhibited similar symptoms.

My guess is that the staff probably kept a closer eye on criminal patients, and this is because statistically they were more likely to attempt to escape. Don’t ask me why – there doesn’t seem to be any obvious reason, unless you like the notion that time behind bars had inspired them – but it is certainly so.

What I have not had time to do – but might be interesting to investigate – is whether the language doctors used when making observational notes, or writing reports slipped into prejudicial terms about criminal patients – in effect, whether there was indirect discrimination.

Despite the restorative techniques of routine and recreation, there was still occasional use of harsher treatments, with force-feeding, seclusion and restraint. What do you think was the realistic balance between these very different aspects of asylum life? And, to what extent was the experience of inmates determined by the character of the superintendent in charge?

There’s no doubt that the harsher things went on, but in my experience these were very much the exception rather than the rule. They had to be recorded and reported to the Commissioners in Lunacy, so they were one of the few visible ways that the staff would be held accountable for their actions.

I think what you can say though is that they all must have been very nasty if they were applied to you. Force-feeding in particular is something that makes me shudder – I’ve seen an Edwardian picture of someone being held while the feeding tube was passed into them, and I can’t say it looked to the modern eye anything other than abuse.

The really hard thing is that although feeding, seclusion and restraint were practised on very few patients, those very few often experienced it very regularly for weeks at a time. And it’s quite right to say that the superintendent would have influenced the extent that they were used. Even in an asylum, there are behavioural norms, and each superintendent had to decide how to enforce those norms, or how much to tolerate deviation from them.

Moulsford Asylum seems to have been very much part of the local community in Berkshire. Do you think Moulsford was typical of other asylums?

Yes, I do. It is – was – quite a small asylum, and Cholsey – the nearest village – is quite a small village. But the staff bought from the local shops, their children went to the local school, the patients walked around the village, and local tradesmen supplied the asylum.

All of that is very typical. People often express surprise that local nimby types didn’t object to asylums being built near them, but of course the asylum brought employment and economic benefits.
It’s not like today, when NHS procurement teams might buy stuff or employ staff from anywhere in the world – 150 years ago, most resources were found locally, so there was money to be had from these places, and generally the local communities embraced them.

What would you say is the most important legacy of the Victorian asylums? And what lessons can we learn from their experience for mental health care today?

Do you remember me saying earlier that putting mentally ill people in prisons, or on the streets, or leaving them unsupported with family carers was seen to be a bad thing? Well, I wonder how the Victorians would view our mental health care in the 21st century? It’s possible that they might judge us harshly.

I also mentioned earlier that the Victorian values – compassion and recovery – still hold true. I guess what we lack these days are beds, respite care and spaces that create a feeling of refuge. When the asylums closed, these were the babies that were chucked out with the bathwater. Our challenge is to find a way to resurrect them outside the institution. We haven’t really got there yet.

What are the most valuable records available for researchers and family historians interested in individuals admitted to asylums, and where is the best place to find them?

The good news is that there is an excellent survival rate for asylum records – the result of both the long-term nature of asylum care and the vast amounts of storage space on asylum estates.
Case notes (and sometimes files) are the things to look for: they provide lots of biographical information about patients and, if you are really lucky, about their families too. And before you can get to them, you will probably need to use admission and discharge registers first.

Public asylum records are usually in the relevant county or city archives; while the Wellcome Library has a collection of private asylum records for posher types, and some hospitals – notably, Bethlem – maintain their own stuff. The National Archives has put some of the Government returns of ‘lunatics’ on Ancestry recently, though the information in these is basic.

After two outstanding and successful books, do you have plans for a new writing project?

Gosh, outstanding and successful – they seem two very kind words to use!
I have three more mental health books mapped out. One is Georgian, but the other two return to Victorian life. The plan is to explore those connections I spoke about – to talk about society and families as much as about mental illness itself.

Grand plans – but plans that will take a good while to reach fruition. Writing two books in three years, and holding down a day job at the same time is just not sustainable – take it from me!

Many thanks to Mark for an excellent interview. I can highly recommend Life in the Victorian Asylum, which is available now from Pen and Sword Books and Amazon.
You can follow Mark on Twitter @markoria

This article first appeared on Angela’s website and is kindly reprinted here with her permission.