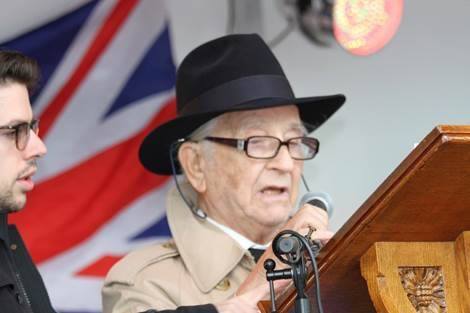 Tributes have been paid to Chaim Ferster, the Holocaust survivor who later settled in Cheetham Hill who has died this morning at the age of ninety four.

Brought up as a Jew in Poland before the Second World War, he was incarcerated in eight Nazi concentration camps during the conflict, including Auschwitz and Buchenwald.

Chaim was seventeen when the Nazis invaded Poland and has described in vivid detail his experienced from then until the age of twenty one when he was liberated by the Americans.

“I witnessed the true depths to which man can sink and the speed with which others can rush to join him there,” he once told of his experiences.

From March 1943, he went through several concentration camps, where he experienced hell on earth.

In Graditz he contracted typhus and by some miracle survived. In September 1944 he arrived in Auschwitz, where he remembered vividly seeing the smoke coming out of the chimneys  after the bodies had been burnt.

After 6 weeks, they were selecting engineers. He immediately volunteered and after various tests, he was fortunate enough to be selected along with a few hundred others.

They were loaded onto cattle trucks and after a horrendous journey on which many people died, they arrived at Niederorschel in Germany. This camp was comparatively like a holiday camp. He worked in a factory assembling the wings for Junker planes.

At the beginning of April 1945, they closed the camp and all the inmates were ordered onto a Death March. Many people died and on the evening of the 10th April 1945 they arrived at Buchenwald. During roll call on the 11th April, American planes flew overhead, the German guards scattered and American tanks entered the camp shouting, “You are free, you are free!”

He arrived in the UK on February 7th 1946 to start a new life thanks to his uncle, meeting his wife the Ritz ballroom in Manchester. and in 1948 they married having 3 sons, 6 grandchildren and 2 great granddaughters. Chaim’ wife died in January 2014.

Deputy Police and Crime Commissioner Jim Battle has paid tribute to Chaim Ferster.
“Chaim dedicated himself to work with schoolchildren and adults to continue keeping the memory and horror of the Holocaust at the forefront of our minds. Chaim was a survivor himself and his horrific accounts at the hands of the Nazis during the Second World War are both powerful and moving.
“Chaim came and spoke at Greater Manchester Police’s Holocaust Memorial Day event on Friday 27 January, with a clear message that we should never forget the horrors of the Holocaust and work together for hope, respect and peace.
“We all have a duty in the name of Chaim to continue his work so that now and in the future we never forget the circumstances that arose when hatred was allowed to fester and infect society. Chaim will be sadly missed and my heart goes out to his family, friends and the many thousands of people who heard his testimony and stand true to his words.”

An emotional day for Oldham as Annie comes home

How a brain tumour couldn’t keep this Hale M&S manager from returning to work...