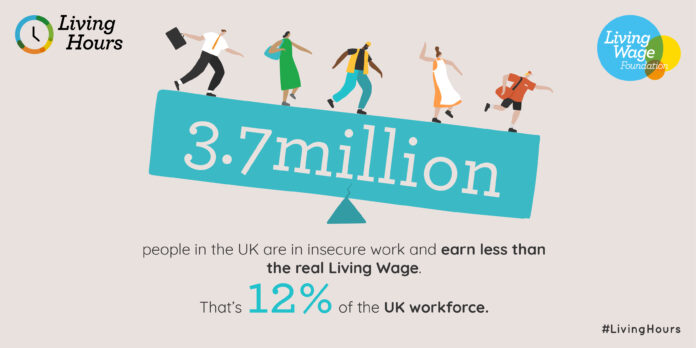 There are 3.7 million people (12%) in the UK in low paid and insecure work, and these insecure workers are more likely to have lost work during the pandemic, according to new research conducted by the Living Wage Foundation (LWF).

LWF analysis of the Labour Force Survey (LFS) and Family Resource Survey (FRS) found that around 3.7m people are in insecure forms of work and earn less than the real Living Wage of £10.85 per hour in London, and £9.50 outside of London.

Low-paid insecure workers are at a greater risk of losing work due to Covid-19. 46% of insecure, low-paid workers were away from work (mainly due to being furloughed) during the height of the pandemic, compared to 17% of non-insecure workers earning above the Living Wage.

“Insecure work has been a consistent feature of the labour market over the past twenty years. The result is millions of people unable to get the hours and the pay they need to meet their everyday needs, with many families throughout the UK struggling to keep their heads above water. Over the past year this problem has been exacerbated, with many low paid workers in insecure jobs also more likely to lose work. There is a real danger that as we look to recover from the huge damage of the pandemic, we fail to recognise the vital need for an economy built on jobs with decent pay and secure hours. This is what we need for a modern, dynamic economy that delivers stability to workers, families and businesses.”

“Good jobs should provide a reliable foundation to enable people to build a better life for themselves and their families. Too often, the jobs that are available don’t offer the stability or security workers and their families need to plan their lives and avoid being pushed into poverty. More than a third of people paid below the real living wage saying that short notice periods for shifts had a negative impact on their household finances.

“Worryingly, those who were lowest paid before the pandemic have been hardest hit by the uncertainty that has followed it, when those whose finances have the smallest margins rely the most on forward planning and being able to budget. Some employers already do the right thing by guaranteeing secure hours for their employees but alongside this it is vital that the Government brings forward its promised Employment Bill in this parliamentary session. Action on secure work will address the injustices faced by many working families and prioritise good jobs as the economy recovers”.

Final recommendations for the new Northern rail network have been made, with Government urged...