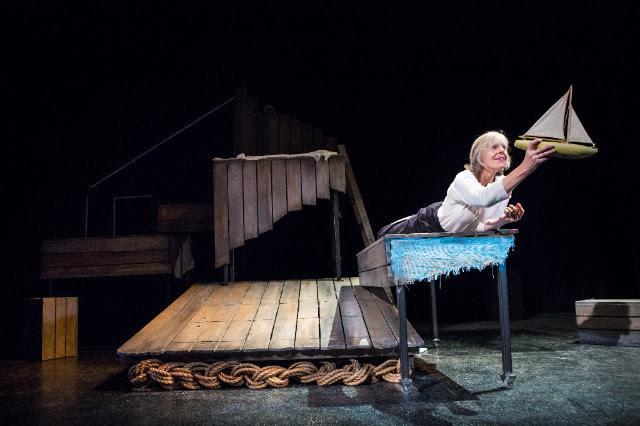 Olivier award-nominated producers Wizard Presents, in association with Watford Palace Theatre, will bring their magical adaptation of Why The Whales Came by Michael Morpurgo to The Lowry Wed 25 – Sun 29 October.

This follows their critically acclaimed production of Morpurgo’s I Believe in Unicorns, which toured the UK throughout 2014/2015

Why The Whales Came stars multi-award-winning performer and storyteller Danyah Miller and has already been seen by over 12,000 people.

This production is a one-woman physical, theatrical storytelling show that takes place on a simple wooden structure which transforms from a jetty to a home to a bed to a boat. The set reveals hidden treasures including messages, letters, boats and a beach. There’s an element of projection and quirky ‘puppetry’ too.  Audiences tell us that the show enthrals families from 7 to 107 years!

Children Gracie and Daniel have been forbidden to go near the mysterious and seemingly dangerous Birdman. But messages and clues intrigue them and, after being lost at sea, in the fog and stranded on his tiny island, they begin to unravel the Birdman’s secrets, the villagers’ fears and superstitions, and learn why the whales came to the island.

Why The Whales Came is directed by Dani Parr and designed by Kate Bunce with sound design by Martin Thompson and lighting by Will Evans, the same creative team as I Believe in Unicorns together with video design by Cate Blanchard and movement direction by Jenni Jackson.

Wizard Presents’ hugely successful production of I Believe in Unicorns has enchanted audiences in excess of 50,000 on tour, at the Edinburgh Festival, and in the West End. It won an Argus Angel Award for Artistic Excellence at the Brighton Festival 2014 and a Family Arts Festival Audience Choice Award in 2015.