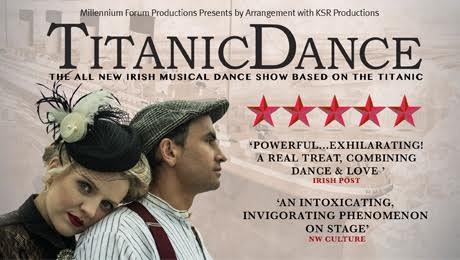 The Palace Theatre in Manchester will stage the hotly-anticipated English Premiere of the new hit Irish Dance Musical sensation TitanicDance this September.

TitanicDance tells the story of the world’s most famous ship from its beginning in a Belfast shipyard to its tragic end in the Atlantic Ocean. Produced by Millennium Forum Productions by arrangement with KSR Productions, it first took audiences in Ireland by storm when it opened at the Odyssey Arena, Belfast in 2014, receiving standing ovations before enjoying a sell-out run at the Millennium Forum in Derry.

This is not just an Irish dance show; it’s an emotional journey of hope, aspiration, love, heartbreak and sadness that will mesmerise audiences everywhere.

Manchester lad James has been Irish Dancing since the age of four. He was the lead dancer of St Bede College’s internationally famous Young, Gifted & Green Irish Dance troupe which staged countless shows for charity and raised over £200,000 for different local causes.

He started dancing professionally with Lord of the Dance the day after he took his last GCSE at St Bede’s, and has travelled all over the world with the hit show for the last 14 years, appearing on countless TV programmes including an American Presidential inauguration which was watched by an audience of over 30 million.

He also runs the Keegan Academy of Irish Dance in Manchester with his sister Louise.

Speaking about performing in the TitanicDance English premiere in Manchester, the 30-year-old lead dancer and choreographer said: “This is something I’ve always wanted to do. I’ve spent the last 14 years touring with Lord of the Dance, and I’m really excited about helping to create a new show with other dancers like Ray Sweeney who is the show’s creative director and is another one of the principal dancers.

“It’s great to have the support of the Manchester Irish Festival website and my friends and family in Manchester and Ireland. I’m delighted that we have been able to secure the English Premiere of the show in my home town.”

James went along to his former school St Bede’s College to officially start the countdown to the 2017 premiere of the show – which takes place at the Palace Theatre on Sunday 24 September.

He met head teacher Dr Richard Robson, along with John Brehney the director of Rosgal Limited who is sponsoring the show, and his grand-daughter Erin Angela Breheny, a pupil at the school.

Dr Robson commented: “We’re all very proud of James. He is an incredibly talented young man, who embodies the Bedian values of hard work and loyalty and uses his incredible talents to inspire others. We’re delighted that James will be returning to the College after the performance of TitanicDance to host a series of workshops to inspire students of all ages from three to 18 across the College.”

Tony Hennigan from Young, Gifted and Green at St Bede’s added: “It’s great to see James doing so well. I was lucky enough to be invited to the world premiere and the show just blew me away. It has a great storyline and some fantastic live traditional Irish music which accompanies the breath-taking Irish dance routines within a stage set that makes you believe you are back there on the Titanic. The show has all the ingredients of a world-wide hit.”

Last year, the hit show enjoyed a hugely successful tour of China where its appearance at the China International Folk Arts Festival in Qinghai enabled it to be seen by a live audience of over one billion people.

The show also made its inaugural visit to the US where it was performed to acclaim at the Branson Events Center in Missouri.

The 2017 tour starts at the Belfast Waterfront on 13-14 September and after dates in Dublin, Glasgow, Manchester and Derry it will tour China from 2-29 October.