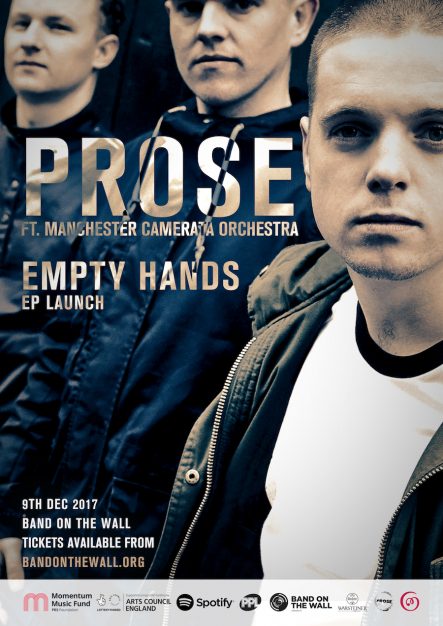 Manchester Camerata are regarded as one of Britain’s ‘most adventurous’ orchestra’s. Involved in projects such as the Hacienda Classical the orchestra have linked up with hip-hop trio Prose. The team have produced a five track EP called Empty Hands.

The record is sure to see the two style clash. The urban sound of Prose accompanying the precision of the orchestra. The project, funded by the PRS Foundation, will feature tracks performed by Prose and a Camerata string quartet.

Prose were compared to many artists during their early years. From similarities to The Streets and Plan B to Oasis due to their melodic lad rock influence. The trio, made up of Mike Murray (rap and vocals), Dave Stone (vocals and bass) and Lee Royle (guitar and vocals), provide lyrics relating to real life experiences.

The group have released their debut album, Home of the Brave, in 2016. They have also been supporting acts such as Emeli Sande and Professor Green around the country.

Murray said on the collaboration, “This is exciting new territory that we’ve been wanting to explore for a long time… it’s a new audience for us and a new sound for our audience. It goes beyond music and will show what can be achieved through musicians collaborating that may not ordinarily work together.”

The Manchester Camerata orchestra opened the Pyramid Stage at Glastonbury this year with their Hacienda Classical show. The orchestra have collaborated with different artists who feature in a vast number of different musical genres. Their innovative projects have icluded working with classical superstar Martha Argerich and the iconic band New Order.

The orchestra is a registered charity and is at the forefront of music-led dementia research. It also has a pioneering community programme, Camerata in the Community.

It was a chance meeting with the head of the community programme, Lucy Geddes, that began the process of developing Empty Hands.

“We’re incredibly excited to have the opportunity to work with such a talented group of musicians and bring them together with Manchester Camerata’s orchestral players. Prose have a unique sound and we’re looking forward to being part of their EP and performing together at Band on the Wall,” said Geddes.

Prose and Manchester will present Empty Hands on Saturday 9th December. You can book your tickets here.

You can find more information on Prose and the Manchester Camerata on their websites.

Why many people love playing roulette?

How to Select the Best Home audio-visual system