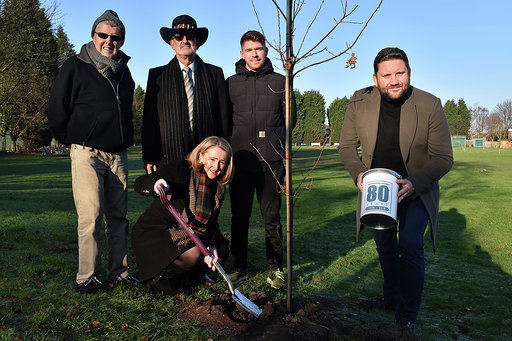 Over the last few months communities across the region have been planting oak trees after Manchester Airport gifted 80 trees to local organisations to mark the year of its 80th birthday. Oak is the traditional anniversary gift for 80 years.

From schools to sports clubs and charities to community centres, organisations have been planting their oak trees alongside a commemorative time capsule to leave a lasting legacy for future generations.

With the usual lifespan of an oak tree being around 200 years, and some living over 1,000 years, the trees will be enjoyed by residents for generations to come.

Rebecca Long-Bailey, MP for Salford and Eccles, who joined a planting at Monton Sports Club, said: “It is wonderful that Manchester Airport gave away oak trees to celebrate its 80th birthday and I’m delighted that a key part of my local community – Monton Sports Club – had the opportunity to get involved. The airport has strong roots in the community and employs a large number of my constituents, and so I was pleased to be involved in this event.”

Woodheys Primary School in Sale and Wellington Secondary School in Timperley were among the organisations planting oak trees, and also both joined the airport in turning 80 in 2018. Pupils of all ages filled time capsules and planted them alongside the trees as part of the celebrations.

Jon Beisly, Headteacher at Woodheys Primary School, said: “We’re really excited to be involved in the airport’s oak trees giveaway, with our school also turning 80 years old. We planted a tree, a time capsule and a plaque to signify turning 80 and it was great to be joined by the Mayor of Trafford, and pupils and teachers past and present for the planting celebration. We enjoyed celebrating with the people who have helped build this school over the years because it might be many bricks and mortar that make a school but it’s the people inside that really make this school such a special place to work.”

The oak trees have been planted as part of Manchester Airport’s yearlong 80th birthday activity, which also included the release of the hugely poignant “Time Flies” film, created in partnership with Tony Walsh.

Wendy Sinfield, Community Relations Manager at Manchester Airport said: “We are very proud of our regional roots so it’s fitting that oak is the symbol for 80 years. It’s really special to celebrate the airport’s birthday year with our local communities and gift them something that can be enjoyed for years to come.

“Working with the community is very important to the airport, be that our work with schools, community groups or the Airport Academy. I’m looking forward to seeing the trees flourish across the region.”

Have your say on the future of Stretford