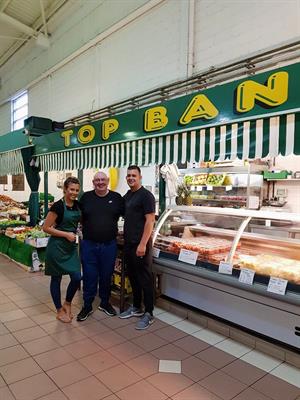 Dave West, 61, was born into the fruit and veg trade quite literally when his mother gave birth to him in a banana box at the family market stall in Leigh.

And now, the West family is celebrating the business being passed through four generations over 100 years.

Dave’s Grandad, Wilf West, opened ‘West & Sons’ 100 years ago and wheeled his cart from Tyldesley to Leigh every day to trade outside the bus station. After he passed away from a heart attack aged 44, Wilf’s wife, Margaret, took over the stall so it remained in the family.

Over time, Dave’s dad, Desmond, and Uncle Arnold worked on the stall together before Arnold took over their second stall, based in Chorley.

Dave had been helping out at the market since being a young child, even travelling to Manchester with his family at five years old to visit the wholesaler.

By the time he left school, he was working there full time and since taking over from his father, Dave opened a second popular stall in the market called Top Banana.

Speaking about the stalls history, Dave said: “We have a great reputation with the community. We’ve been trading a very long time and although market culture has changed, we have brought the old-school values through to the current day.

“I handpick products at the wholesalers so our customers know they are receiving quality stuff – it’s not mass produced or delivered to us.”

Despite being 61, Dave is still very hands on with the stall but has left the day-to-day running of the business to his son, Jack and his daughter Georgina.

He continued: “I’m keen for Jack to continue the legacy of the stall. All my kids have had involvement in the markets throughout their lives. They know what they’re doing and I know Jack will do a great job.

“We have a great relationship with our customers, which isn’t something you get in supermarkets. We understand people; we know what they want and we deliver it.”