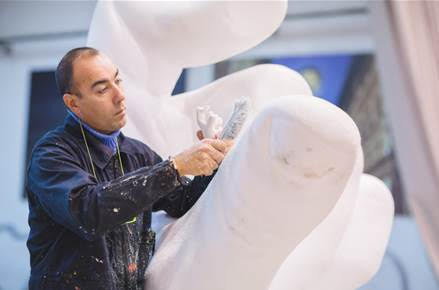 A collection of works by renowned international artist, Lorenzo Quinn, have been unveiled in Manchester.

The series of sculptures are displayed in an exhibition at Castle Fine Art on King Street, running until Sunday 7th October.

One of the world’s leading figurative sculptors, Lorenzo Quinn’s work appears in many private collections throughout the world. His public art includes 2017’s most-photographed piece of art in the 57th Venice Biennale, a giant pair of hands reaching out of the Grand Canal titled Support.

Quinn’s artistic inspirations include masters Michelangelo, Bernini and Rodin, and his sculptures reflect his creative approach to the passage of time, as he describes his sculpture Leap of Faith: ‘The past is set in stone, the present is carving itself in wood, and the future is an empty goblet to fill with dreams’.

The son of costume designer and Mexican-American actor Anthony Quinn, Lorenzo split his childhood between Italy and the USA. He studied at the American Academy of the Fine Arts in New York, originally hoping to become a Surrealist painter.

During his twenties, he enjoyed a brief acting career, playing alongside his father in the 1989 film, Stradivari. His need to create took over, and he turned to sculpture as a way to convey his innermost feelings to the viewer.

Nic Beese, gallery director for Castle Fine Art, King Street, said: “Lorenzo Quinn is one of the greatest sculptors of our time, so for this exhibition the entire gallery is dedicated to his stunning artwork.

“We invite all art enthusiasts and fans of Lorenzo’s work to experience this rare opportunity to view an array of his sculptures, both large and small, in person, and learn about the fascinating concepts behind each piece.”