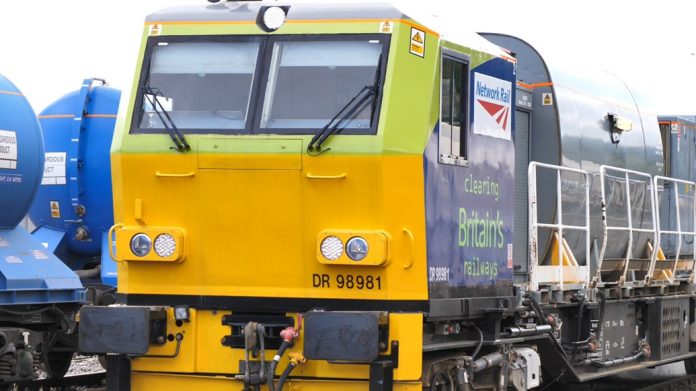 Eight specialist trains are working 24 hours a day to blast leaves off rails and keep passengers moving this autumn.

Across the North West, the eight leaf-buster trains will cover 102,000 miles this autumn as they tackle the widely-mocked problem of leaves on the line.

The reality of leaves on the line is no joke: they get flattened onto the rails by trains creating a Teflon-like, slippery coating which limits trains’ ability to accelerate or brake rather like cars driving on black ice.

The outcome is a disrupted timetable as trains, which can weigh several hundred tonnes, need more time to start and stop and must travel more slowly through affected areas.

The eight leaf-buster trains use powerful jets of water to blast the rails clean of squashed leaves. The water jets are so powerful that if they sprayed one spot on the track continuously they would cut straight through the steel rail.

Across the North West, more than 32 million litres of leaf-clearing water will be blasted on to the rails over the next 10 weeks.

Anna-Jane Hunter, North of England Rail director at Network Rail, said: “Leaves on the line is no joke. If we didn’t work to remove them, their impact on train passengers wouldn’t be funny either.

“They have the same impact on the railway as black ice does on roads, making it impossible to drive a train normally.

“Our leaf-busting trains will cover more than 102,000 thousand miles this autumn – vital to help keep customers safely and swiftly on the move.”

These trains will cover all the railways from Crewe in the South, Merseyside and the borders of North Wales to the West, Todmorden in the East and up to Carlisle in the North, until the beginning of December.

Liam Sumpter, regional director at Northern, said: “Every autumn we see cancellations and delays as a result of damaged wheels caused by leaves on the line. Last year was particularly challenging with leaf-fall causing significant disruption across the north west.

“To minimise potential disruption we are checking our entire fleet and replacing vulnerable wheels, enhancing our driver training and have introduced special timetables on routes that have been problematic in the past.

“Customers are our top priority and we are doing everything possible to ensure this autumn runs as smoothly as possible.”

Tatton MP appointed secretary of state for work and pensions

NHS enlist airline staff to join the fight against Covid-19