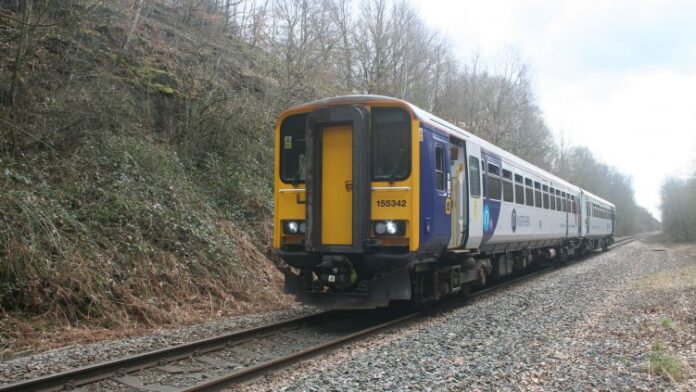 Delays to train services caused by leaves on the line could finally become a thing of the past, thanks to new track cleaning technology developed by engineers at the University of Sheffield.

The new rail cleaning technique, developed by a team of researchers led by Professor Roger Lewis from the University’s Department of Mechanical Engineering, uses dry ice pellets in a stream of high pressure air which freeze the leaves and then as the pellets turn back to gas they are blasted away from the railhead.

The method was first developed by the group in 2015 and now after testing the technology on railhead treatment trains over the past two years and on passenger trains in early 2020, the technique has proven to be significantly more effective at removing leaves from the line, preventing delays and improving braking distances for trains than the current cleaning methods.

The Sheffield cleaning system is able to clean parts of the railway network where current methods are unable, is lighter and doesn’t affect nearby railway infrastructure. The system is also much better for the environment as it uses reclaimed carbon dioxide.

Furthermore, the researchers have successfully deployed the track cleaning system onboard passenger trains in a collaboration with Northern. This is the first time that passenger trains have been used to clean the track anywhere in the world.

Adding a track cleaning system to passenger trains would free-up the railway, reducing congestion, as extra railhead treatment trains wouldn’t need to be added to the network to remove leaves from the line. The cleaning system would also be able to be deployed on parts of the railway network where railhead treatment trains are often unable to reach – such as branch lines and track close to the platforms at stations.

The research team is now set to run further trials with Northern throughout the autumn and winter 2021/22 to test the cleaning system onboard passenger trains. The system will be approved to run on an in-service line and is currently going through an approvals and certification procedure. The trials with Northern are being run thanks to funding from Network Rail’s Performance Innovation Fund.

The research team expects the new cleaning system to be rolled out widely by 2023/24.

Professor Roger Lewis, Professor of Mechanical Engineering at the University of Sheffield, said: “Leaves on the line are a huge problem for the rail industry. They cause significant delays to train services, which lead to disruption for passengers, and the issue costs the industry millions of pounds every year.

“At the moment, railway lines are cleaned using railhead treatment trains, also known as RHTTs, but there is only a limited number of these trains available, so they can’t treat the whole of the network. RHTTs are expensive to run, so they are mainly used to clean high-traffic, intercity lines, which means many lines are left untreated. Furthermore the cleaning system they use can damage parts of the track over time and the system has to be switched off when travelling through stations to avoid spraying passengers, so this means lines within stations are left unclean and trains can find it more difficult to stop and start resulting in the delays we see every year.

“The cleaning system we have developed at the University of Sheffield solves all of these problems and the trials we have done over the past two years show it cleans the track more effectively, significantly reduces delays and improves stopping distances. We’re really excited to have developed the first track cleaning system to be deployed onboard passenger trains and are looking forward to testing this even further with Northern.”

“One of the biggest risks to our performance during October and November is leaves on the line, but by helping to develop new technology we aim to deliver the very best service for our passengers.”

Burnham-I’ll vote to leave in any new referendum