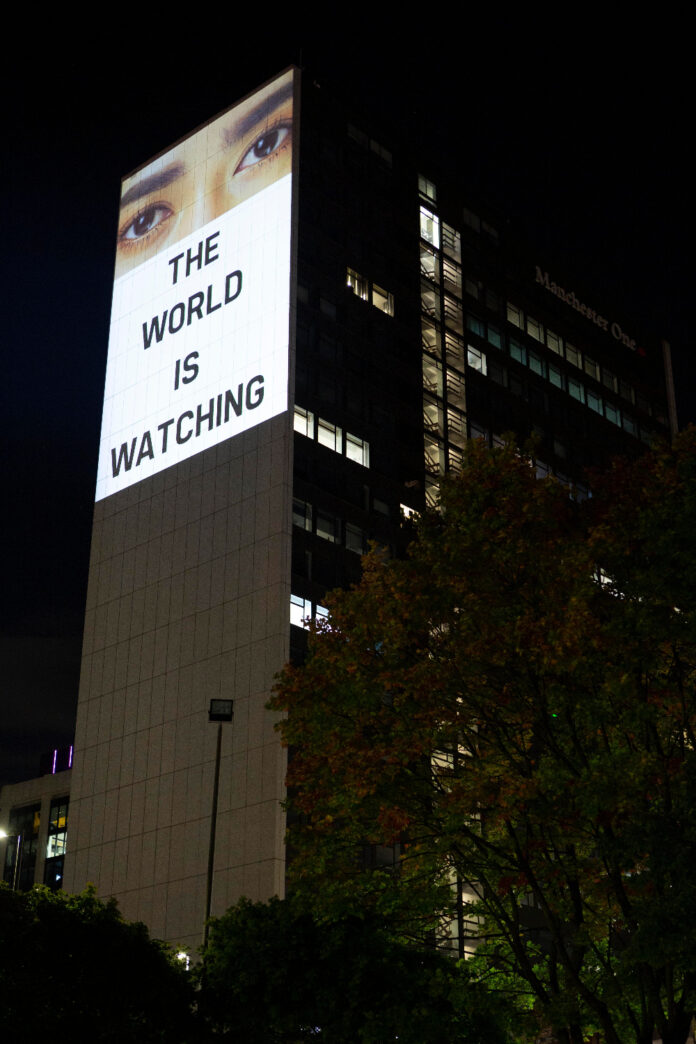 Vaccine access campaigners have told Boris Johnson that 10,000 people are dying every day while he disrupts efforts to allow low and middle income countries to produce their own vaccines, projecting a message onto One Manchester Tower as the Conservative Party’s annual conference begins.

The People’s Vaccine Alliance projected “The world is watching. 10,000 people die every day from Covid-19 while the UK defends vaccine monopolies. Boris Johnson, waive vaccine patents and vaccinate the world” onto a building just metres away from the conference hall.

It comes as the world marks one year that the UK has blocked attempts to waive intellectual property on Covid-19 vaccines, tests and treatments at the World Trade Organisation (WTO). A shocking 3.5 million people have died from COVID-19 while the UK has blocked the waiver.

India and South Africa first proposed the waiver on 2 October 2020, which would remove patent and trade secret barriers allowing more manufacturers to begin producing COVID-19 tools without fear of infringing on big pharmaceutical companies’ intellectual property rights. After receiving near-unanimous support from low- and middle-income countries, the United States threw its weight behind the Waiver in May 2021, while Australia announced its support last month.

Germany has forced EU opposition to the Waiver, despite support from countries including France. But with post-election coalition talks likely to bring a change in government in Germany, the UK could be the last opponent to the Waiver at the WTO.

Campaigners are calling for the government to stop opposing the waiver when the WTO’s intellectual property council meets tomorrow. They also want the government to force pharmaceutical companies to share their vaccine technology and know-how with the World Health Organisation, so that other manufacturers can produce Covid-19 vaccines, tests and treatments.

“10,000 people die every day that the UK continues to block a vaccine intellectual property waiver at the World Trade Organisation. Each one of those deaths should be a stain on the conscience of the Prime Minister.

“Right now, Boris Johnson is enforcing a system of vaccine apartheid. At Conservative Party conference this week, he must finally get out of the way of countries producing their own vaccine. Failing to act will shame the UK for a generation or more.”

“The UK government says that ‘no one is safe until everyone is safe’ but they’ve bought the lion’s share of doses and now they’re blocking other countries from producing their own. This is highly dangerous as unequal vaccination risks new variants developing.

The UK Government must tackle COVID-19 monopolies and push pharmaceutical companies to share their manufacturing know-how through the World Health Organisation. The Oxford/AstraZeneca vaccine was 97% publicly funded, – including a significant contribution from UK taxpayers. The Government must work with AstraZeneca and the WHO to make this vaccine a global public good.”

“It is unacceptable for the UK government to continue standing in the way of willing, qualified, and capable manufacturers across the world who can make the vaccines needed to ensure everyone is protected and bring this pandemic to an end.

“Vaccine monopolies are earning pharmaceutical corporations billions in profit at the cost of lives and livelihoods every day. Support for this waiver would also protect people in the UK – vaccine scarcity in the rest of the world prolongs the pandemic, escalates the risk of vaccine resistant variants, and continues to cause massive economic disruption and loss to UK businesses.”