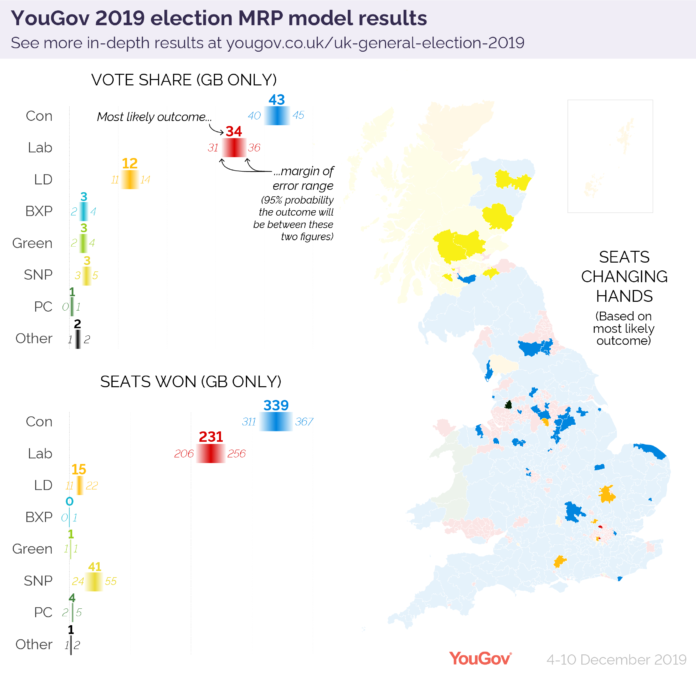 The latest You Gov Poll out today and commissioned by Sky News predicts a 28 seat majority for the Tories, significantly lower than the 68 it predicted two weeks ago but the pollsters say they cannot rule out a hung Parliament given the margin of error in the data.

The poll taken from a sample of 105,000 people over the last seven days and across every seat in Britain, puts the Conservatives on course to win 339 seats, up 21 seats compared to the last general election in 2017.

Labour is down 31 to 231 seats, SNP up six to 41 seats, Liberal Democrats up three to 15 seats and Plaid Cymru and Greens unchanged on four seats and one seat, respectively.

Across Greater Manchester the picture from two weeks ago has changed, most significantly in Leigh Andy Burnham’s old seat where the last poll put the Tories slightly ahead but now has Labour’s Jo Platt with a narrow lead.

Bury North East is neck and neck between the two parties, Bury South shows the Tories slightly ahead while Bury North, one of the National Bell Weather seats to watch has Labour slightly increasing its lead.

The two Stockport seats to always closely watch sees Cheadle giving the Tories victory over the Lib Dems, the same in next door Hazel Grove, while Sir Graham Brady’s still leads in Altrincham and Sale West though Labour has narrowed the lead in the past fortnight.

Nationally the poll shows that most of the seats changing hands are the ones Labour won in 2017, passing back to Tory control.

Most of the Conservative gains are expected to be in the north, in urban West Midlands and former mining areas in the East Midlands and County Durham – concentrated in areas that voted to leave the EU. They are doing less well in the south and in London where the model now suggests two gains for Labour.

The Conservatives are also doing less well in Scotland than in the November MRP model and are now predicted to lose five seats, although many of these are extremely tight and could go either way.

In both constituencies the third-placed party (Labour in Raab’s seat and the Lib Dems in IDS’) is on 8 percent of the vote — suggesting there is plenty of scope for tactical voting to force the incumbent out. The picture is bleaker still for Environment Secretary Theresa Villiers, who is now 4 points behind her Labour opponent in Chipping Barnet and on course to lose her seat.

The new poll lists Workington — which has taken on an iconic status in this election as being typical of the Northern, working-class seats the Tories are targeting — as staying in Labour hands, along with Tom Watson’s old seat of West Bromwich East and former Manchester Councillor Mike Amesbury’s seat of Weaver Vale. However many others including former Europe Minister Caroline Flint’s seat of Don Valley would still turn blue tomorrow night.

Labour will open a Sure Start centre in every community