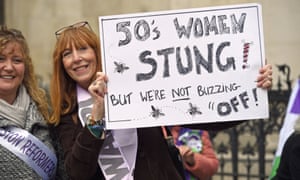 Labour has promised compensation to more than three million women who lost out on years of state pension payments when their retirement age was raised.

The scheme will be delivered within Labour’s first full five year term of government. Payments will go to women born in the 1950s who had their state pension age hiked.

McDonnell said the pay-outs were a “historic debt of honour” to the women.

David Cameron’s coalition government presided over a change in the law that increased the women’s state pension age to 65 in November 2018 – followed by 66 in October 2020.

Labour would introduce a compensation scheme for the 3.7million women hit by the changes, which Cameron’s Tory-Lib Dem government imposed in 2011.

It comes after Boris Johnson u-turned on Friday on his pledge to help those affected.

“This week, Boris Johnson dismissed the concerns of a woman who has lost out on her pension, telling her it’s “not possible” to right the huge wrong she and so many others have suffered. This is about consideration for those who have paid into the system all their lives and made this country what it is, only to be hung out to dry by a government that puts the interests of the richest first.

“The next Labour government will compensate women who were unfairly hit by the rise in the state pension age and give them the respect they deserve.

The powerful and wealthy want you to believe that real change is impossible, that it’s not realistic.