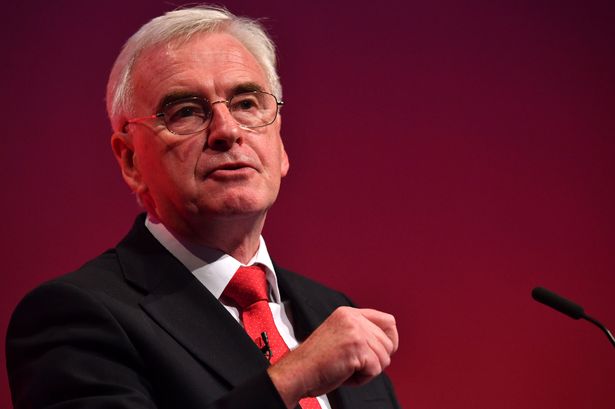 John McDonnell will use his first major speech of the election campaign to promise an “irreversible shift in the centre of gravity in political decision making and investment” from London to the North.

McDonnell is expected to pledge an additional £150 billion in a new Social Transformation Fund, to be spent over the first five years of our Labour government.

In a speech in his home city of Liverpool, McDonnell will say that the fund will be used to “upgrade and expand our schools, hospitals, care homes and council houses”.

The Shadow Chancellor will also promise that a “powerful section of the Treasury” will be based in the north of England.

McDonnell will say that a National Transformation Fund unit of the Treasury, will be launched to deliver the plan to ensure that key decisions about investment in the north are made in the north:

“To achieve that objective also requires therefore an irreversible shift in the centre of gravity in political decision making and investment in this country from its location solely in London into the North and regions and nations of our country.”

McDonnell will say that a National Transformation Unit of the North will ensure the regions gets their fair share of investment:

“On the scale of change investment needed I can tell you today that Labour’s National Transformation Fund will be bigger than we promised at the 2017 election. For areas that haven’t had their fair share for years, we’ll deliver £250 billion of investment here and around the country over the next ten years through our Green Transformation Fund.

“Upgrading our energy, transport and other networks. To meet our targets and decarbonise as thoroughly and fast as our commitment to a just transition will allow. But it’s not just the natural world that’s been neglected. So we’ll also commit to an additional £150 billion in a new Social Transformation Fund.“Spent over the first five years of our Labour government, the Social Transformation Fund will begin the urgent task of repairing our social fabric that the Tories have torn apart. A hundred and fifty billion pounds to replace, upgrade and expand our schools, hospitals, care homes and council houses. To deal with the human emergency which the Tories have created, alongside the climate emergency.”

McDonnell will also set out how Labour plans to break up the Treasury and devolve some of its powers from London to the north:

“But it’s not just about spending more. It’s about how it’s spent. With decision-making devolved down to local communities.

“So we’ll carve out part of our National Transformation Fund for a Local Transformation Fund in each of England’s regions. With money for the devolved governments as well of course. And that money will be ringfenced for infrastructure projects decided and developed at a local level. With decisions made transparently and democratically in each region about how their fund is allocated. And regional offices of government departments overseen by a board of local county and city council leaders with that board publicly accountable to open meetings of local councillors, trade unions and business representatives. They will be supported by a National Transformation Fund unit of the Treasury.

“This is where the investment is needed and this is where those decisions on investment need to be made on the ground. Power is coming home. Back to the people. We can only deliver the real change we need by putting power into the hands of communities Of the people who know their local area best, like those who came up with the tidal barrage idea for the Mersey, which we’ll build.

“It won’t just be public investment, of course. We can’t do it if the private finance sector isn’t pulling its weight too. So the days of the City dictating terms to the rest of the country are over.

“The finance sector will be brought in line with the rest of us in addressing the emergency, with an end to short-termist thinking – the thinking that only prices in risks associated with an investment here and now, rather than the potential for a dramatic change in the price of carbon investments leading to significant stranded assets.”

“These are welcome proposals from Labour, but we need clarity on some key issues. At IPPR North, our research shows that power hoarded in Westminster is the root cause of our deep regional divides. Politicians in London have failed all of our regions – even the capital. Any future government must put devolution of power and resources at its heart. When the North prospers, so does the nation.

“It is encouraging to see proposals for a regional tier in England, accountable to council leaders, trade unions and businesses – something IPPR North has recommended. Devolved and inclusive decisions are better decisions.

“Labour must build on the innovation that has already begun right here in the North – metro mayors and pan-northern collaboration are both gaining momentum. We’re building a powerhouse of the North, by the North, for the North. We now need to see concrete proposals for how parties will devolve in a coherent and inclusive way to all towns and cities”.

Labour launches a manifesto for every region of England