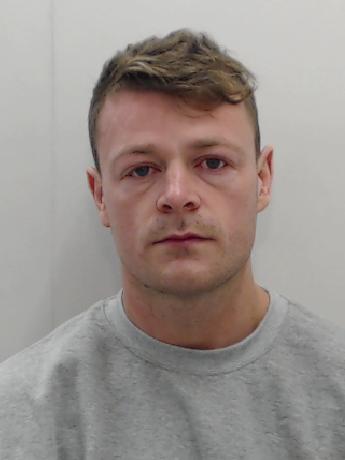 A Stockport man has been jailed for life and will serve a minimum of 30 years after being found guilty of a brutal murder of a Bolton dad.

Nathan Aaron Daniels shot twenty eight year Michael Blake in the back of a van in what the court was told was a gangland type execution over a drug debt last November.

The court heard that Michael was at his home in Westhoughton when he answered a knock to the front door and left the house, telling his partner he wouldn’t be long.

Twenty minutes later, his partner was disturbed by frantic knocking at the door and a man shouting that an ambulance was needed.

As she went outside, she found Michael unresponsive, covered in blood and lying in the road.

Emergency services attended the scene, to what was initially thought to be a road traffic collision, and soon after took Michael to hospital, where it was discovered he had a gunshot wound to his leg and a gunshot wound to the back of his head. He died from his injuries the next morning.

The investigation rapidly established that Michael had been shot while in a white Ford Transit van, which CCTV showed travelling towards his house just prior to the knock on his door and travelling away from his house almost 20 minutes later.

Telephone analysis linked four associates to the murder, who have all been jailed after pleading guilty at an earlier hearing.

Nathan Quigley aged of Cleworth Walk, Hulme has been jailed for 7 years for manslaughter.

Joe Wilson aged 27 of Romney Way, Stockport has been jailed for 7 and a half years for manslaughter.

Brendon Leo Fallon aged 36 of Whitsbury Avenue, Gorton has been jailed for 21 months for assisting an offender.

John Edwards aged of Farley Way, Reddish has been sentenced to 21 months suspended for 2 years for assisting an offender.

Detective Inspector John Mulvihill of GMP’s Bolton Borough, said: “This was a brutal killing executed by Nathan Daniels who was in dispute with Michael and thus recruited his henchmen Quigley and Wilson.

“As if this wasn’t enough, he armed himself with a loaded handgun and travelled with his allies from Manchester to Bolton, where they plotted to take Michael from his home.

“Michael willingly got into the van, oblivious to the fact that Daniels was armed with a gun. He was driven to a nearby secluded location where Daniels, in a fit of rage, shot Michael to the leg and then the head, before mercilessly dumping his lifeless body in the road for his loved ones to find.

“Within minutes of the shooting, Daniels and Wilson were tapping into their links in the criminal underworld and employed Fallon and Edwards to hide, clean and eventually dispose of the crime scene; the white Ford Transit van.

“This was a fast moving and complex investigation with dedicated officers who pulled together evidence from various sources and trawled through extensive CCTV footage as well as painstakingly analysing telephone records to bring this investigation to a successful conclusion.

“The traumatic events of his murder are something Michael’s family and friends may never recover from but I hope today’s sentencing provides them with some closure, knowing those who played a part in his death have been brought to justice.”