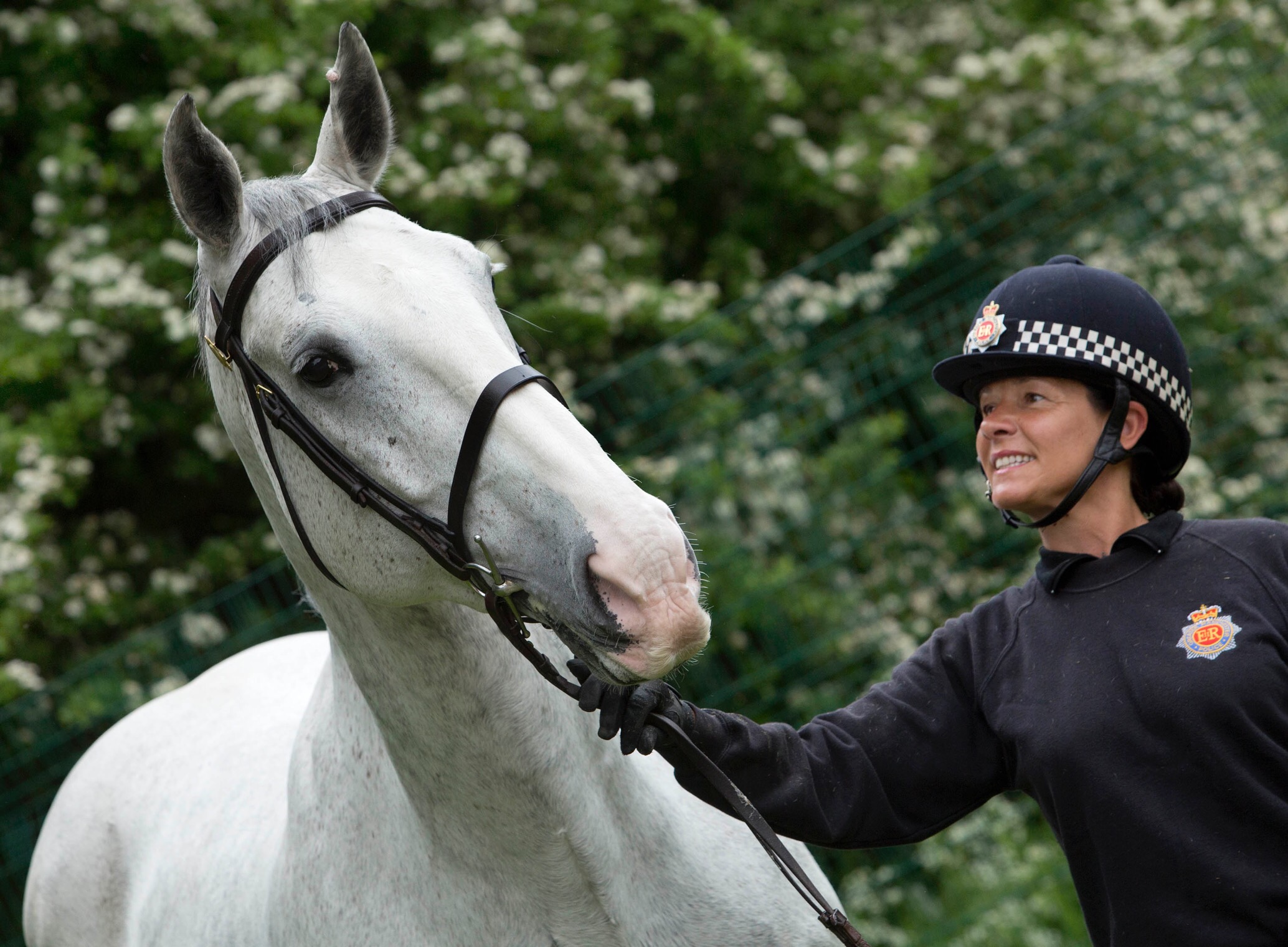 PC Wendy Townley and police horse Steele were seriously injured in the line of duty while patrolling the streets of Manchester.

A vehicle collided with Steele’s back legs. This caused him to be forced backwards onto the bonnet of the car and smashed the windscreen. Steele was then flung forwards 10 feet onto his knees; falling onto his side, while PC Townley was thrown off Steele. The incident caused significant injuries to horse and rider. Fellow police horse Crackit and his rider PC Emma Whittenbury managed to evade the impact, but were severely shaken up.

After a year of health care and training to recover from the incident, PC Townley is back on duty and Steele is on a ‘back to work’ rehabilitation programme. They are now spearheading a campaign for Greater Manchester Police (GMP) and charity The British Horse Society (BHS) urging drivers to slow down around horses. The launch event in central Manchester will be attended by the GMP and Lancashire uniformed mounted divisions with their police horses. Cheshire rural officers will also be in attendance.

The launch supports the BHS’s Dead Slow campaign. In the five years since the launch of the charity’s horse accidents website, over 2,000* reports of road incidents involving horses across the UK have been reported to the charity. Of these, 36 caused rider deaths, and 181 resulted in a horse dying from their injuries or being put to sleep.

In Greater Manchester alone, 28 road incidents have been reported to the charity to date, causing the death of one horse and the serious injury of a rider.

The campaign falls under GMP’s Operation Considerate, an initiative urging all road users to show others more respect on the roads. Greater Manchester Police will be hosting driver horse awareness events across the region, and is supporting the BHS Dead Slow key messaging on their horse boxes to raise awareness.

Alan Hiscox, Director for the BHS, said: “It’s fantastic to see the recovery of PC Townley and Steele, but too often road incidents can cause life changing injuries or unnecessary deaths. This has got to stop. With Greater Manchester Police’s support we aim to make the roads safer for horses and riders in the region.”

Inspector Neil Humphreys from Greater Manchester Police’s Tactical Mounted Unit said: “Thankfully our colleagues and horses made a full recovery but we know it could have been a very different story, which is why we’re delighted to support the British Horse Society with their road safety campaign.

“We all have a responsibility to make our roads safer and the aim of ‘Dead Slow’ is to encourage all road users to share the road responsibly and be considerate of each other.
“When approaching a horse, motorists should pass wide and slow to keep themselves safe as well as the rider and horse.”