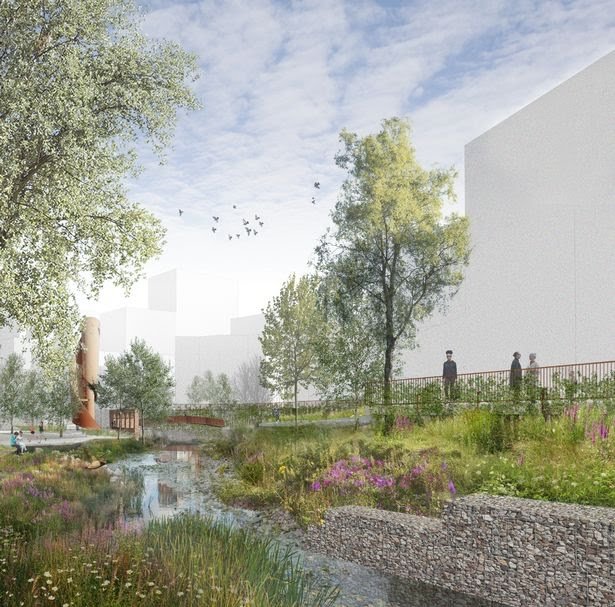 The park will form part of the Mayfield Partnership’s plans for the regeneration of the former Mayfield Freight depot which has lain empty at the Piccadilly Station for more than thirty years since its closure.

The plans show a park covering nearly seven acres, and includes more than 121,000 sq ft of soft landscaping, nearly half of which will include riverside habitat alongside the Medlock.

There will also be a riverside walkway overlooking the park; 146 newly-planted trees; a wetland boardwalk including riverside planting; south-facing seating and steps with a capacity for up to 500 people; a terraced garden with nearly 6,500 sq ft of rain garden planting; and 365m of opened-up river.

The application also includes plans for a nine-storey, 70,000 sq ft office building overlooking the park and a 545-space multi-storey car park on Baring Street and will be the first phase in a £1.4b transformation of what has been a neglected backwater of the City Centre.

A separate application for a larger flagship 12-storey office building expected to be made this autumn.

Richard Upton, chief development officer at U+I, said: “The last three years of consultation, planning and opening up Mayfield to a variety of community uses and major events has re-introduced Mancunians to a forgotten corner of the city with huge social and economic potential.

“Submitting our first formal planning application is an important moment in realising that potential and we are excited that our vision for a world class neighbourhood for businesses, residents and visitors is taking shape.”

“Mayfield is fast becoming one of the city’s most prominent cultural venues, attracting an array of enterprising and creative individuals and businesses. This application is enabling the creation of a distinctive new urban neighbourhood, with imaginative placemaking at its core – bringing together public and private partners to ensure that the area will continue to be vibrant as well as economically resilient for years to come.”