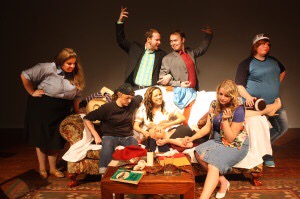 Middle-aged Olive Madison lives a slovenly, single life in her high rise apartment. Having the girls round to play Trivial Pursuits is her way to relax, although she doesn’t always manage the niceties of entertaining!

When one of her girlfriends, Florence Unger, leaves her husband and, against Olive’s better judgement, moves in, the apartment and their lives transform completely, with hilarious comic effect!

Lyceum Theatre Oldham ends its season in New York style with the female version of Neil Simon’s THE ODD COUPLE in June.

THE ODD COUPLE proved such a huge success for Neil Simon in the 1960s and 1970s that he returned to this winning formula in 1985 and re-imagined the play with a cast of female protagonists.

This final production in the Lyceum Theatre Oldham 2015/16 Season is directed by well-known Lyceum regular, Phil McCarthy, Vice-Chair of the Management Team, who has performed, directed and volunteered for over 20 years. “The cast is made up of great actresses, some making their Lyceum debuts” Phil says. “They are all strong performers in their characters and are a pleasure to direct.”

Lyceum Theatre Oldham has achieved unprecedented success this season, with all its shows selling out, often before the production even opens. This means many more people are enjoying the new seating and special atmosphere of this wonderful basement theatre in the centre of Oldham. The company is expecting the new 2016/17 Season to also do well, when season tickets go on sale in July.
Listings Information

Droylsden through to second round of FA Cup Qualifying

Time to tot up your tree planting totals