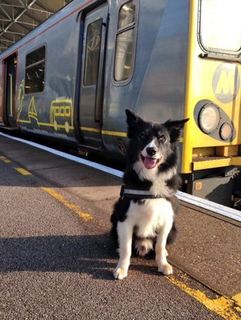 Transport Police Dog Mojo, who along with his handler PC Healy was one of the first on the scene of the Manchester Arena bombing, will receive the Humanitarian Award at Crufts tonight.

Mojo and Phil had been at home following an early shift when news broke that there had been an explosion at the Ariana Grande concert at the Arena.

They immediately made their way to the incident where they were met with horrific scenes.

Mojo worked around the injured on the station concourse to ensure the safety of the responding emergency services.

He and PC Healy then methodically searched the area, clearing it of any potential secondary devices.

Mojo worked tirelessly in horrendous and traumatic conditions right at the scene of the blast to keep others safe in the aftermath of the bombing.

Phil said: “Mojo was different that night. Just like you get to know a colleague, I know him, and I could tell he was upset at what he saw and he didn’t want to be there. Nevertheless, like the true professional he is, Mojo worked on through the night, clearing the area until 7am. Even then on the way home we had to respond to another call of a suspicious device.”

An eight year old Collie, Mojo is set to retire next month when he’ll put his paws up and enjoy a change of pace at home with Phil and his family.

Phil added: “The award at Crufts is a touching way to end Mojo’s incredible career as he prepares to settle into his retirement.”

Mojo was nominated for the award by the National Police Chiefs Council . He will receive his award in front of an audience of 8,000 people shortly before the Best In Show accolade is presented at around 8.20pm.

Tesco hit with £8m fine after poisoning the River Irwell