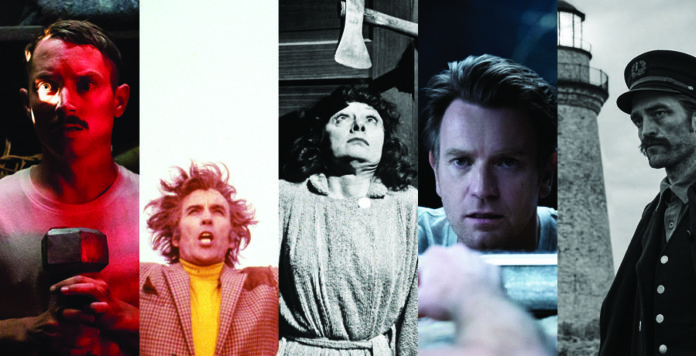 HOME and Film4 are excited to announce the programme for the fourth annual FilmFear season – the biggest programme yet will comprise six days of horror, extreme cinema, cult favourites and special guests coming to Manchester this October.

Kicking off the season on Tuesday 29 October will be a special preview of The Lighthouse, director Robert Eggers’ much-anticipated follow-up to his folk-horror debut The Witch (2015). Starring Robert Pattinson and Willem Dafoe as lighthouse keepers battling the elements, isolation, inner demons and more on a remote and mysterious Maine island in the 1890s, the eerie period tale will be on general release in January 2020 making HOME audiences amongst the first to see the film in the UK. FilmFear and HOME will also tour the film to Hyde Park Picture House in Leeds the following evening.

Following in its wake over the course of six nights through to Sunday 3 November come more previews of highly anticipated films, including: the creepy imaginary-friend horror Daniel Isn’t Real, a SXSW hit from the producers of last year’s FilmFear hit Mandy, starring Patrick Schwarzenegger (Midnight Sun) in the title role alongside Miles Robbins (Halloween) and Mary Stuart Masterson (Some Kind of Wonderful); the twisted noirish thriller Come to Daddy, the directorial debut from The Greasy Strangler producer Ant Timpson, starring Elijah Wood (The Lord of the Rings); and, a Halloween night preview of Doctor Sleep, based on the Stephen King novel and starring Ewan McGregor (Trainspotting) as Danny Torrance, 40 years after his terrifying stay at the Overlook Hotel in The Shining, alongside Rebecca Ferguson (Mission: Impossible series) and Jacob Tremblay (Room).

With a strong focus on new talent this year, FilmFear includes four directorial debuts from the hottest new voices in horror. In addition to Ant Timpson’s Come to Daddy, the line-up also includes: Tilman Singer’s Luz, a tale of demonic possession that morphs into a brilliant, bewildering puzzlebox; All the Gods in the Sky from French director Quarxx, marking the return of the ‘French Extreme’ and winner of Best Feature at the Dead by Dawn Horror Festival 2019; and, Jagoda Szelc’s hushed yet dread-filled Tower. A Bright Day., an intense family drama from Poland that blurs the boundary between horror and high-art.

Screening alongside these hot new titles is a trio of classic horrors for film fans to revisit or discover on the big screen. Masters of horror Vincent Price and Christopher Lee will feature in The Tingler (1959) and The Wicker Man (1973) respectively, with Werner Herzog’s 1979 take on the Transylvanian count, Nosferatu the Vampyre, bringing the season to a chilling finale on 3 November.

Special events accompanying the screening programme include a “Bring the Family” screening of Nicolas Roeg’s The Witches on Sunday 27 October, selected by HOME’s Young Programmers, and a one-man show from filmmaker Daniel Cockburn, How Not to Watch a Movie (or, All the Mistakes I’ve Made, part 2). Starting off as a look at 1990s horror films, Cockburn will take the audience down a cinephilic rabbit hole, resulting in a weird, funny, mind-bending autobiographical journey through two decades of over-interpretation and paranoia.

FilmFear is curated by David Cox, Film4 Channel Editor, in partnership with HOME.

David Cox commented: “Film4 are thrilled to be returning to HOME for a fourth year of FilmFear. Our line-up feels even more varied, provocative and unpredictable than ever, which is testament to the many strange forms that horror can take. These are films for fans who like to explore the further reaches of the genre, with plenty of first-time and sophomore filmmakers to introduce you to some bold new visions. While HOME is where our dark heart is, we’re excited to be spreading the Fear further for the first time and taking our show on the road to present our opening film The Lighthouse at the Hyde Park Picture House in Leeds.”

Jennifer Hall, Film Programme Producer at HOME, added: “We’re excited to be partnering with Film4 on the biggest edition yet of FilmFear, and to be expanding the season beyond Manchester for the first time with the Leeds screening of our brilliant opening film, The Lighthouse. We’re looking forward to serving up another Halloween treat for horror-hungry fans and welcoming audiences of all ages to our first FilmFear “Bring the Family” screening of The Witches, a fitting contribution to the season from HOME’s Young Programmers who have also programmed The Wicker Man.”

Manchester Pride has announced the activity for the Superbia Weekend