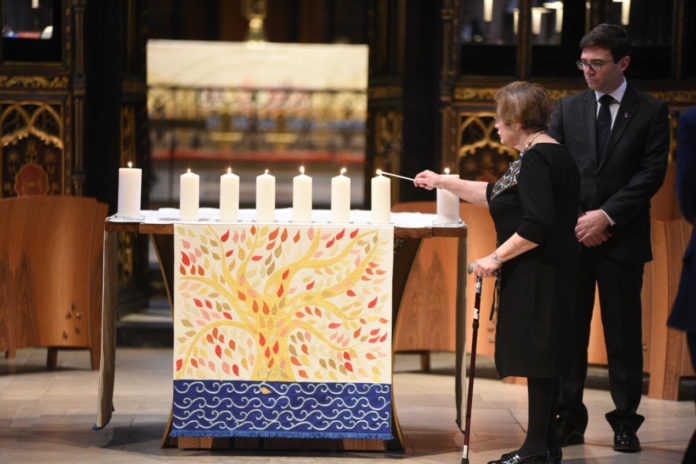 Civic, Political, Faith and Community Leaders from across Greater Manchester have gathered in Manchester Cathedral to commemorate Holocaust Memorial Day, at the first city-region wide event of its kind.

Holocaust survivor Ruth Lachs, who lives in Bury, spoke about her experiences to those present at the event. Attendees also heard musical performances from Royal Northern College of Music musicians and Spirit & Soul Choir.

TUC Regional Secretary Lynn Collins read the moving poem ‘First They Came’ by Pastor Martin Niemoller and the Lord-Lieutenant of Greater Manchester, Warren Smith, delivered the Prayer for the Genocide in Rwanda

The event was supported by the Holocaust Memorial Day Trust, the Association of Jewish Refugees and the Greater Manchester Combined Authority.

“By coming together in this way, we can send the loudest of messages, that this is a place which rejects hate in all its forms and has an enduring belief in the innate equality of all people.

“As fewer and fewer survivors of the Holocaust remain with us, it is more vital than ever that we ensure the next generation learn the lessons of that terrible atrocity and the other tragic genocides that have taken place around the world. Events like these remind us of our collective duty to challenge hatred wherever we see it, or face the consequences of our collective silence.

“I’m grateful to all those who spoke, The Holocaust Memorial Day Trust and Association of Jewish Refugees for their support and to the Cathedral for agreeing to host this event.”

Olivia Marks-Woldman, Chief Executive of the Holocaust Memorial Day Trust said: “As people come together across the UK to mark Holocaust Memorial Day 2019, we are pleased to see the Mayor and the Greater Manchester Combined Authority making a strong commitment to remembering all those murdered during the Holocaust, under Nazi Persecution and in the genocides which followed, including in Cambodia, Rwanda, Bosnia and Darfur.

“The event at Manchester Cathedral will be one of more than 11,000 taking place across the country – in schools, workplaces, local authorities, libraries and many more varied settings.

“At the Holocaust Memorial Day Trust we are pleased to see people learning lessons from genocide, for a better future – particularly at a time when rising antisemitism, anti-Muslim hate and other forms of prejudice are causing real damage across society.”

David Holgate, Sub-Dean of Manchester Cathedral said “Our Cathedral is actively committed to challenging all forms of hate crime, and so we are very glad to be hosting this important Holocaust Memorial Day commemoration. We hope the event will help us all with the process of our own inner change. As Etty Hillesum wrote before she was killed in Auschwitz in 1943, “I no longer believe we can change anything in the world until we first change ourselves.”

Mayor gets close look at how to tackle anti social behaviour and crime on...