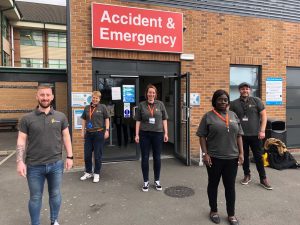 LAUNCHED in May 2021, the Greater Manchester Navigator Project works with young people aged 10-25, to help them to cope and recover from their experience of violence and assist with access to local support networks to prevent the potential of further violence.

Due to the success of the project, scope has been expanded to include referrals from North West Ambulance Service (NWAS) and community referrals.

In some instances, NWAS may interact with a young person who doesn’t require or doesn’t want hospital treatment but may need support. The expansion of the referral process means that where necessary, this young person can still be referred to the team of Navigators.

Commissioned by Greater Manchester’s Violence Reduction Unit, the Navigator project is completely independent and confidential. Young people are entitled to receive support regardless of whether they report an incident to the Police or not, no personal information is shared with the Police unless a young person agrees to that.

“The Navigator project is another example of how we are committed to reducing violence across the city-region.

“The expansion of referrals to NWAS, communities and individuals, will help change the lives of even more young people through this early support.”