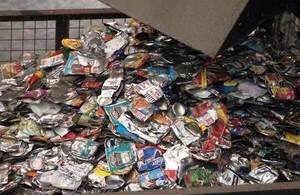 Litter louts could be hit with £150 fines as part of ambitious new plans to tackle rubbish in England.
Environment Secretary Andrea Leadsom unveiled the Government’s first Litter Strategy for England to reduce the near £800m burden to the taxpayer of clean-up costs.

Under the new measures, the most serious litterers could be hit with the £150 fines, while vehicle owners could receive penalty notices when it can be proved litter was thrown from their car – even if it was discarded by somebody else.

The new motoring rules, which are already in force in London, make owners liable even if they didn’t throw the litter themselves.

The new proposals Issuing new guidance for councils to be able to update the nation’s ‘binfrastructure’ through creative new designs and better distribution of public litter bins, making it easier for people to discard rubbish.

Stopping councils from charging householders for disposal of DIY household waste at civic amenity sites (rubbish dumps) – legally, household waste is supposed to be free to dispose of at such sites.

Working with Highways England to target the 25 worst litter hotspots across the road network and creating a ‘green generation’ by educating children to lead the fight against litter through an increased number of Eco-Schools and boosting participation in national clean-up days.

They also propose creating a new expert group to look at further ways of cutting the worst kinds of litter, including plastic bottles and drinks containers, cigarette ends and fast food packaging.

The strategy also outlines measures to protect seas, oceans and marine life from pollution. It builds on the success of the 5p plastic bag charge, which has led to a 40% decrease in bags found on the beach.

Funding will also be made available to support innovative community-led projects to tackle litter that could turn local success stories into national initiatives.

New report paints bleak picture for the next generation

Revealing the sex of our prehistoric ancestor stencil artists