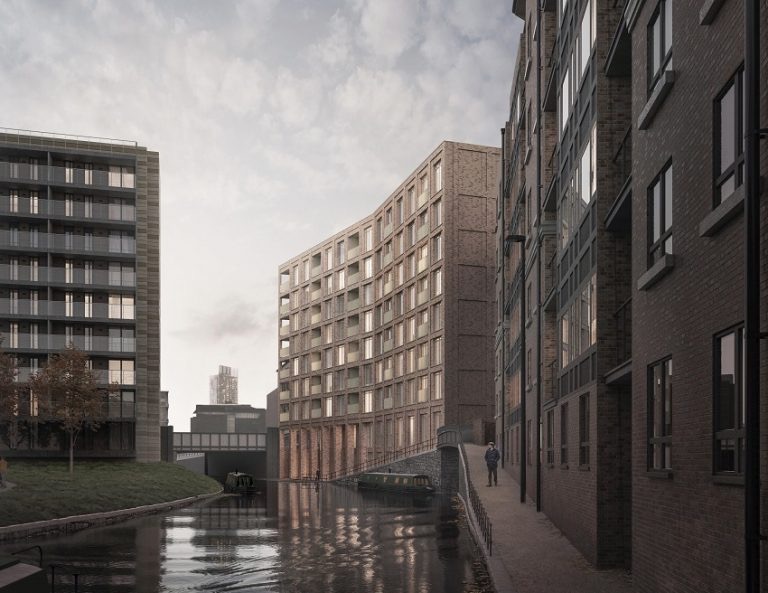 Developer Mulbury has submitted plans to build a luxury apartment scheme on the site of the derelict Excelsior Mill in Castlefield.
The £26m scheme for 108 apartments will see the site of the former printing and book binding works in Hulme Hall Road which  collapsed and was demolished last year, transformed into a high-quality eight-storey development adjacent to the Bridgewater Canal.

The scheme, designed by Tim Groom Architects, provides a solution for a brownfield site which has been vacant since the building partially collapsed in July 2015 and had to be demolished.
The one, two and three-bedroom apartments will be marketed for private sale. Some of the apartments have balconies and access to a communal roof garden. A basement car park will provide on-site parking.
James Alderson, head of Mulbury City, the company’s city centre residential division, said: “This is an important scheme for Castlefield because it fills in a vacant plot along the canal.

“It also brings back an active frontage to the canal towpath with its double-height entrance. We’ve had overwhelmingly positive feedback so far on the design of the scheme.

Tim Groom, of Tim Groom Architects, said: “The design responds to the distinct Manchester context of Castlefield and the turn in the canal. We have looked to reinterpret the architectural history of the site and the old-fashioned printing trays in some of the ornamentation around the building entrances at roadside and canal edge.

“The design complements traditional and modern buildings in the vicinity while sitting comfortably alongside Castlefield’s historic core.”

The scheme lies just outside the Castlefield conservation area. Mulbury held a public consultation on the proposed scheme on March 8 and has also consulted with Manchester City Council, Places Matter!, the Bridgewater Canal Company and local councillor Nigel Murphy during the planning process.

The Excelsior Printing and Binding Works opened in July 1870. With capacity for 750 employees it was one of the largest works of its kind.

How To Start A T Shirt Business In The UK