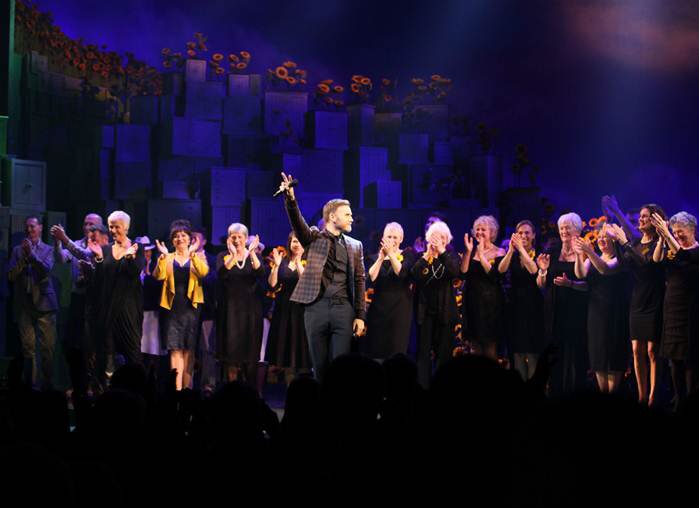 Gary Barlow wowed audiences at The Lowry last night (Tue 12 Jan) when he took to the stage for a surprise appearance following a performance of his new musical The Girls, running at The Lowry.

The Girls, is a brand new British musical written by Gary Barlow and Olivier Award-winning writer Tim Firth, who are both from Frodsham in Cheshire and have been friends for 25 years.

The Girls is inspired by the true story of a group of ladies, who decided to appear nude for a Women’s Institute calendar in order to raise funds to buy a settee for their local hospital, in memory of one of their husbands.

Last night Gary Barlow and Tim Firth joined the original Calendar Girls and the cast of the musical on stage following the show for a special surprise encore. Gary led the delighted audience in a rendition of the song ‘Dare’ – one of the key numbers in the show.

Over 300 nurses from the North West were invited to this special performance, including nurses from the charity Bloodwise – the Calendar Girls chosen charity. Since the original nude calendar was created in 1998, the Calendar Girls have raised nearly four million pounds for the charity. During the run of The Girls at The Lowry, there will be bucket collections for Bloodwise following performances.

Back to the future for our High Streets