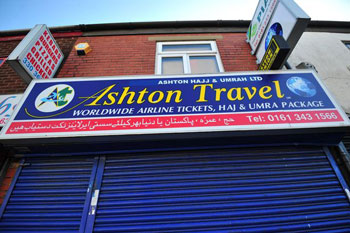 A travel firm that was last year successfully prosecuted by Tameside Council for causing customers to lose thousands of pounds while going to the Haj has now been convicted for fraud.

Babur Hussain (53), of Lees Road, Ashton, who at the time managed Ashton Hajj & Umra Limited – was convicted of four offences under the Fraud Act 2006.

Sabir Raza (56), of Lees Road, Ashton, a sales person with the firm – was also found guilty of four offences under the Fraud Act 2006, received an 11-month sentence, suspended for 18 months, and ordered to do 180 hours’ unpaid work.

The offences related to claims that the firm’s flights and packages were financially protected under the ATOL scheme, misleading customers about the quality of accommodation and return flights back to the UK.

Both Hussain and Raza were also disqualified as acting as a director (or being involved in the management of a company) for five years from 31 January 2017.

The company, which also trades as Ashton Travel, was also found guilty of four offences under the Fraud Act 2006. It will be sentenced at a later date, following confiscation proceedings under the Proceeds of Crime Act.

Tameside Council Trading Standards had taken action against Ashton Hajj & Umra Ltd after receiving over 40 complaints about the firm.

Customers – many using their life savings – had paid thousands of pounds to travel on a Hajj Pilgrimage, only to be told days before they were due to depart that they had not been allocated a Visa and they were unable to travel. Over 230 people are known to have been affected.

Ashton Hajj and Umra Limited pleaded guilty on 20 July 2016 at Minshull Street Crown Court to trading with a lack of professional diligence. The court fined the company £6700 with £5000 costs and ordered it to pay £34300 in compensation.

It is estimated the pilgrims involved in the case investigated by Tameside Council lost in excess of £600000.

“The convictions follow a complex and comprehensive two-year investigation by business compliance trading standards officers who were determined to take robust action against the company’s unfair trading practices so that victims – who had suffered huge financial and emotional consequences – could seek recompense.

“It’s concerning to see businesses trading with such unscrupulous practices. Most businesses trade fairly and within the law but, for those that don’t, these convictions send out a strong message that action will be taken against them.”

Tameside Trading Standards has issued the following advice to anyone wishing to travel on a Hajj Pilgrimage:
• Check the travel agent is authorised by the Ministry of Hajj. Such agents have to conform to strict criteria set by the Saudi Arabian Government and are allocated Visas for pilgrims to travel

• Make sure the travel agent is ATOL (Air Travel Organisers’ Licensing) and that the trip is protected by the Civil Aviation Authority (CAA). Any UK travel business selling air packages, which includes Hajj pilgrimages, must have ATOL protection. ATOL is the Government backed financial protection scheme, which gives air travellers the peace of mind they won’t lose their money and will get home safely – even if the travel business they book with goes out of business.

Britain on course for longest fall in living standards since records began over 60...