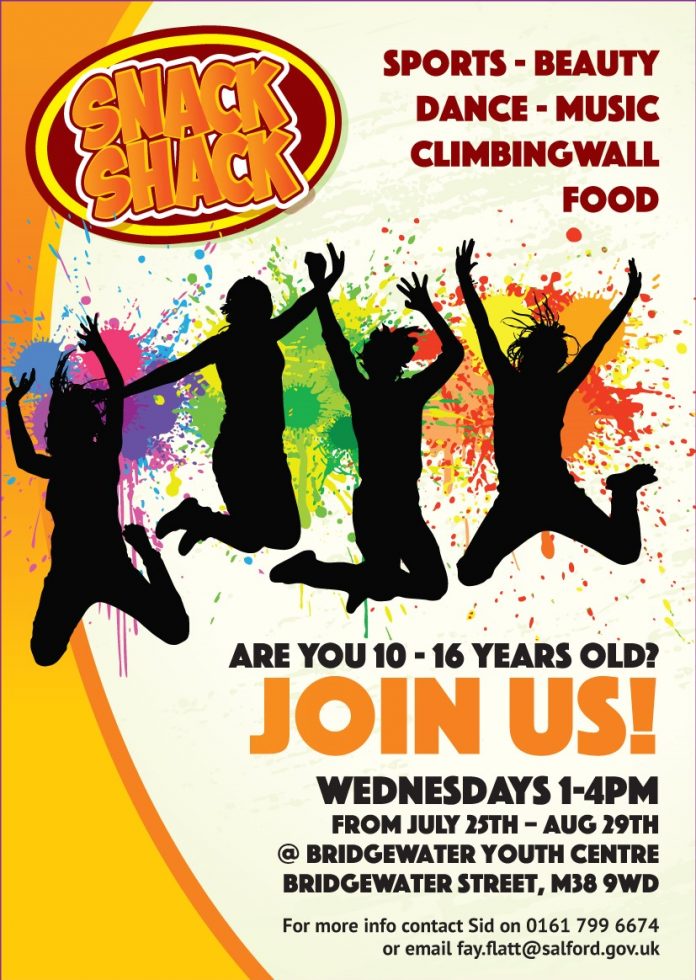 Free food is being served up alongside holiday fun to prevent Salford children going hungry over the summer holidays.

Snack Shack in Little Hulton has been set up by Salford City Council and partner organisations after concerns about the impact of the school holidays on children who rely on free school meals.

Between the end of July and August the weekly day of activities aims to provide everything from cooking lessons and nail art demonstrations to talks about safety and managing money, along with free meals and snacks.

The idea came from youth worker Simon ‘Sid’ Taylor, who revealed he and his colleagues have even dipped into their own pockets to feed hungry kids at youth clubs.

“We started noticing that many of the children coming to youth club nights were hungry. We couldn’t have that so we started offering them eggs or beans on toast. We sometimes had to fund it ourselves but we’ve now linked in with Fareshare through our local Tesco stores who are donating food which would otherwise go to waste.

“I got my slow cooker out and started making stews, because I wanted the children to eat well. They loved it and asked if they could start cooking so we’ve worked on that and now they cook for other young people at the club and at home for their families.”

Snack Shack, billed as Salford’s first ‘food bank for young people’ is being run as a pilot over the summer but the council hopes to expand it to one night a week all year round. It’s appealing for local businesses to help make that happen.

Three Salford schools are also offering their pupils summer activity programmes where they will be given fruit, drinks and a hot meal, thanks to funding from Salford Clinical Commissioning Group.

“In 2017 there were just over 7,000 primary and secondary school children eligible for free school meals in Salford so the issue of holiday hunger is huge. If that’s the only substantial meal they get in the day then you can understand why parents dread school holidays,” she said.

“Snack Shack will help over the summer but we need something like this in place all year round to make sure children aren’t going hungry. It’s part of our network of food banks to make sure people have easy access to emergency supplies and support to help them out of crisis.

“Our longer-term aim is to move people into food clubs where they can buy a decent basket of groceries for just a few pounds each week and get long-term advice and support to move into a better financial position. It gives them more choice, makes better use of donated food and reduces the pressure on food banks which continue to see huge demand. We have over 200 food club members now with more on waiting lists.”

Based at the Salvation Army’s HQ in Station Road, Swinton, which also offers drop-ins, toddler groups and a community shop the centre will help people referred by local frontline professionals, such as health visitors or social workers.

From April 2017 to March 2018 Salford Foodbank, which runs four distribution centres in the city, gave out 4,793 three-day emergency food parcels of which 1,912 were for children.

Oldham Council and communities to tackle litter and fly-tipping

Cashless society? We are not ready for it yet says report