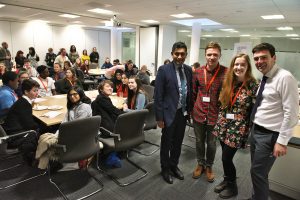 After its first two successful years, the GMYCA is refreshing its membership and is calling on youth organisations across the city-region to apply.

The GMYCA was the first Youth Combined Authority in the country, and the model is now being replicated across the UK with similar youth-led initiatives, including the West Midlands Young Combined Authority and London Youth Assembly.

In its first two years, GMYCA members have been central to the development of policies, strategies and decisions on a number of the city-region’s issues, and have given young people in Greater Manchester a powerful and influential voice.

Among its achievements since inauguration, developing  Our Pass, the city-region’s free bus pass for 16 to 18-year olds, including social and leisure benefits, presenting at Youth Select Committees on Curriculum for Life and Knife Crime and speaking  at the Northern Power Futures Conference and two Conferences of the North

The GMYCA is an inclusive body, with diverse members who are able to represent a significant number of other young people. It is made up of 40 young people aged 11-18, from across 20 different youth organisations within the city-region.

Member organisations serve a two-year term, and the Mayor is now seeking applications from youth organisations who are keen to get involved and become members.

“A couple of years ago I decided to set up the Greater Manchester Youth Combined Authority because I wanted to give our young people a voice and to be at the heart of devolution in Greater Manchester. But I also wanted them to have decision-making power and they have used that brilliantly on developing Our Pass.

They’ve done a fantastic job, they’ve made a real difference and I’m so grateful. We’re now looking for new members and it’s your chance to get involved and help shape a Greater Manchester fit for future generations.”

“For full details, including the application form, please visit: www.greatermanchester-ca.gov.uk/yca . The deadline for applications is 9am on Friday 1st November 2019.

Anyone wanting to find out more should email youth.gmca@greatermanchester-ca.gov.uk or attend an information session on Friday October 18 – please register here: https://ycainfosession.eventbrite.co.uk”

Cancer Warriors Art Exhibition to Open in Stalybridge this weekend