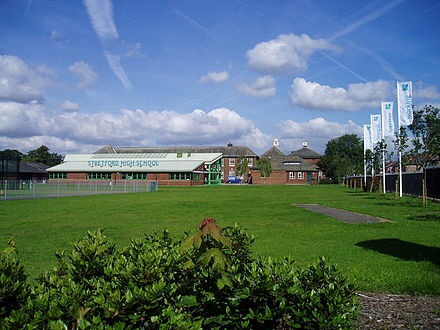 In December 2014 pupils at Stretford High School ran out 3-0 winners during a first leg football match against a community team from Monchengladbach at Manchester United’s former training facility, The Cliff. The game was just one of a number of World War One activities organised courtesy of a collaboration between the school, Manchester United Foundation and Trafford Council.

The donation will go towards the costs of the second leg which will take place in Germany later this year and some notable AFMUP members recently visited Stretford High School to present the cheque.

During the visit the United legends congratulated the team on their footballing ability and offered some tips along with some words of encouragement. Whilst making sure the team concentrated on their education as well as their sport, they also shared some precious memories and experiences of playing at The Cliff. Stretford pupils were also keen to find out the best player the former United stars had ever played with, in which most were in agreement of the late George Best.

The Association celebrates its 30th anniversary in April and over the years have supported a whole host of charities.

“I would like to say a big thank you to the Association for their generous contribution to this commemorative football match. The trip to Germany will be a fantastic once in a lifetime opportunity for the young footballers to travel and play in another country.”

He added. “This week’s visit from members of the Association was great it was a chance for the squad to meet some living legends from the game and get their advice on football as well as life.”

Chris Hirst, Teacher from Stretford High explained how the project has had a really positive impact on the children, he said. “They are more focused, they are achieving more and their grades have gone up.”

Kayde, a member of the squad and pupil at Stretford High School said. “It’s been fantastic meeting all the ex-players, it’s taught me it’s not just about football and that it’s important to concentrate on school as well. You can have fun but keep your head down.”

Denis Law added his good wishes to the Stretford pupils ahead of their upcoming fixture. He then went on to say.

“It was excellent to meet the squad and wish them luck for the second leg. I hope that the boys enjoyed it as much as we did.”

AFMUP’s Wilf Mcguinness said: “It’s been a really enjoyable morning. The boys might not all become professional footballers, but they will become good people.”

Manchester’s good honoured by the Queen