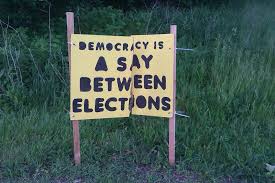 It’s two months until the general election and despite what could well be the most important election in decades, there appears to be groundswell of popular revulsion towards the political process.

The latest debate from the people at Discuss Manchester will be examine why as they ask the question Is Democracy Broken?

In Manchester’s 2012 by-election, voter turnout was18%, the lowest in a Parliamentary by-election since the War.

Across the country turnout keeps going down, support for main parties is in flux and trust in politicians has never been lower. A celebrity who urges young people to join a revolution and abstain from voting tops the best seller list and is adored.

For the motion, Loz Kaye, Leader of Pirate Party UK, part of a worldwide movement standing for freedom of the Internet, civil liberties and a politics fit for the 21st century and Kwame Ibegbuna, mentor, activist, freelance journalist.

While speaking against will be Dr Rob Ford, Manchester University, author of Revolt on the Right, 2015 Political Book of the Year and Michael Taylor, Labour parliamentary candidate, Hazel Grove.

Stitched up at the Working Class Movement Library.