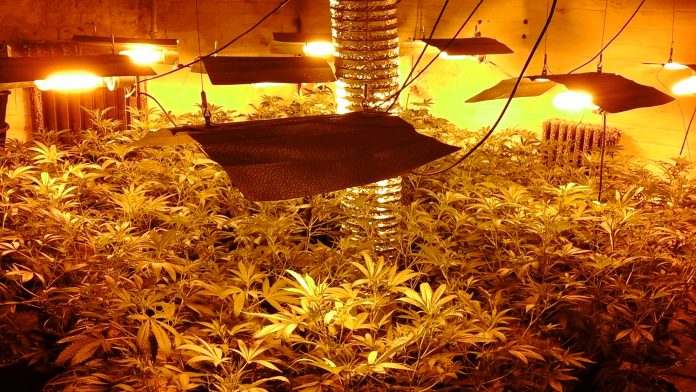 An ex-GMP police officer has been jailed for sixty four months after police seized almost ￡85,000 worth of cannabis in Leigh.

Daniel Aimson, aged 36 of Ullswater Road, Astley, pleaded guilty to misconduct in public office and production of cannabis.He was sentenced today along with seven others

In April 2016 GMP’s Anti-Corruption Unit launched an investigation into the large-scale production of cannabis and on 16 June 2016 search warrants were executed at two unoccupied commercial properties on Railway Road in Leigh.

Officers discovered cannabis farms in both properties and seized 160 plants worth ￡84,500, hydroponic growing equipment and found that the electricity meter had been bypassed.

Detectives discovered that that group had been operating these two cannabis farms and they were arrested and later charged for drugs offences.

Aimson also used his role as a police officer to acquire four driving licences for criminal use by the criminal enterprise.

Daniel Aimson was dismissed at a Special Case hearing on Friday 24 February 2017.

Deputy Chief Constable Ian Pilling said: “The group jailed today was actively involved in large-scale cannabis production, and we were able to seize it before it ended up on our streets.

“Aimson, who was a police constable at the time, abused his position and the trust placed in him as a police officer for criminal gains.

“GMP expects the very highest standards of all its officers and staff. They should be honest and act with integrity and should not compromise or abuse their position.

“We are appalled by the actions of this officer, who has allowed his greed to get the better of him.”