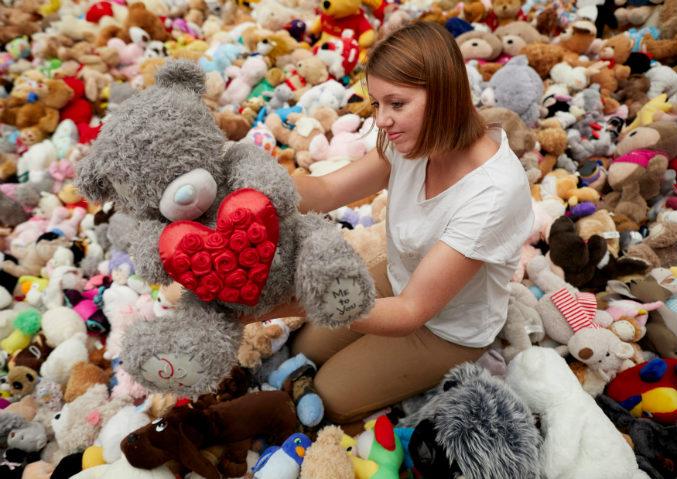 Nearly 2000 teddy bears left in heartfelt tribute to those who were killed or injured in the terror attack at Manchester Arena in May are being moved on this week to their new homes.

1900 teddies and soft toy tributes were left in St Ann’s Square in the days and weeks following the attack that killed 22 and injured hundreds more, and now, six months later, following lots of tender loving care they are being moved on to new homes.

After being left on the square as long as was possible out of respect to all those affected by the bomb, the sea of teddies, flowers, and other tributes were carefully removed from the square by a volunteer workforce of more than a hundred – made up of staff from a number of different businesses and organisations from across the city.

In a painstaking operation that lasted nearly five hours the volunteers worked their way through the sea of tributes, separating out them out into different categories.

Although almost 300,000 bouquets of flowers were left on St Ann’s Square, it was the teddies that tugged most at people’s hearts. Some clearly new, others obviously well-loved and cherished bears, and some even home-made. Together one enormous family of bears – all left with feeling by members of the public, including children, who wanted the loved ones of all those affected to know they were thinking of them and sharing their pain.

After being carefully removed from the square, long-standing Manchester based shoe-makers Timpsons stepped forward and offered to store all of the bears on behalf of the city and to dry them out.

Once they had been dried enough so they could be properly handled and sorted, the bears were then washed and repaired where necessary by an army of Women’s Institute (WI) members from branches across Greater Manchester. The University of Manchester filmed and interviewed WI volunteers during this process and also took individual photographs of each of the teddy bears and other soft toys for an important archive for the city that is currently being established of all things relating to the attack.

Now all spruced up and ready to go on to new owners, the teddies will be distributed to children via Greater Manchester charities including Wood Street Mission and The Toy Appeal, and also by Bearly Loved and The Teddy Trust which work internationally.

Judith Suckling, Vice President, Old Trafford Wonder Women WI, one of the WI branches involved in providing some much-needed TLC to the bears after they were removed from the square, said: “As an organisation we really wanted to do anything we could to help after the bomb and were honoured to be asked to help with the bears. It was very moving for all of us, knowing the bears’ history and why they had been left on the square, and then wanting to do our own bit to clean them and give them a future – to restore them back to being bears of happiness again for another child instead of sadness.”

As well as picking up and sorting all the teddies and soft toys left in tribute, handling and removing all the many flowers left on St Ann’s Square was another very emotional experience for all those involved, and was a major operation in itself.

Most of the floral tributes were taken to Wythenshawe Park, where the wrapping was removed by In Bloom volunteers – but not before any messages attached to them were carefully removed, and saved to be added to the archive. Bouquets which had passed their best were composted and used in the city centre and in other local communities to support new and existing green spaces and containers. A small number of bouquets were pressed or air-dried and the results of this process are still awaited.

Over 600 potted plants were also donated and many of these were planted around the city centre – including in planters at the Cathedral and Manchester Art Gallery. The rest were either donated to residential care homes, offered to In Bloom groups, or planted in Wythenshawe Park.

Several hundred paper items were also left on St Ann’s Square, including cards left with flowers. Every scrap of paper left in tribute was saved and taken to restoration specialists for freeze-drying and cleaning as another important part of the archive being created. This work was carried out free of charge by Harwell Restoration based in Oxfordshire, who donated their services and even drafted in extra people to help them work through the material as quickly as possible to ensure as much as possible was saved.

Volunteers also retrieved several hundred candles from the square that are currently in storage. Those with personal messages or which are symbolic will be transferred into the archive.

Other momentoes and balloons – around 1,000 of them – were also sorted and are in storage. These include Manchester Run medals, bee-related objects, knitted or sewn items as well as very personal items left for individuals. Over 100 balloons were deflated and recorded and a sample of these will also be retained in the archive.

Councillor Sue Murphy, Deputy Leader, Manchester City Council, said: “We’re determined this horrific event that has both devastated and touched the lives of so many people shall not be forgotten, and nor will those who died or were injured.

“The amount of love and feeling invested in each and every one of the teddies and other tributes left on St Ann’s Square could be felt by everyone who saw them, and absolutely no-one could have failed to have been moved by them.

“Whilst we will never forget what has happened, it’s important that we also start to look towards the future. Moving on this huge family of teddies that were left with such feeling and amongst much sadness on St Ann’s Square for other children now to enjoy and to cherish is a big part of this.”

Take a selfie with Emmeline Pankhurst!