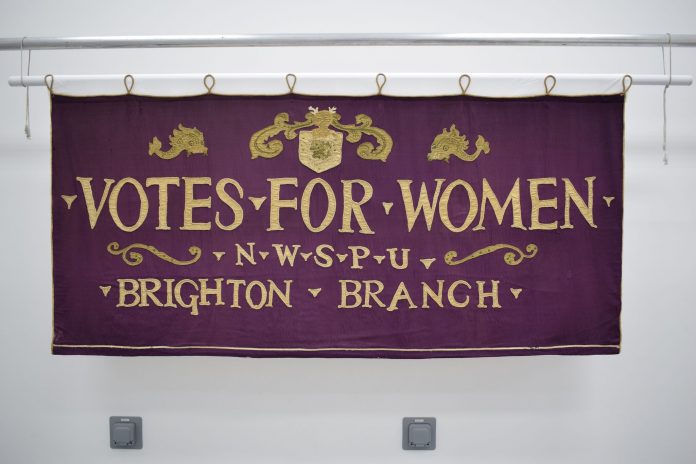 Historic banners telling the story of how people have fought for representation will be going on display from January 2018 at the People’s History Museum, as it marks the centenary of the Representation of the People Act (6 February 1918) when all men and some women obtained the right to vote.

The theme of representation will lead the museum’s programme of activity throughout 2018, as it explores this incredible moment in the history of British democracy.  Its programme for this centenary year has been made possible thanks to the support of the Heritage Lottery Fund.

The 25 banners, which will be on show throughout the year, are part of the People’s History Museum’s world-renowned collection of over 400 political and trade union banners, which are cared for by its in-house conservators.  All have beenactively created and used by campaigners and protesters, and give a vivid account of the slogans and philosophies that were integral to the suffrage movement, as well as other campaigns for representation.

Behind each banner is the story of the people who created it, capturing unique moments in time in the story of democracy. 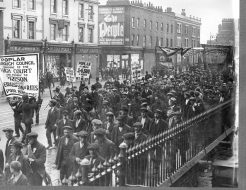 The display will also cover more recent recollections of representation including a banner created by Thalia Campbell for the iconic Greenham Common protest, a female only protest against the placing of US nuclear cruise missiles in Cardiffthat was active from 1981 to 2000. The most contemporary item on display is the International Women’s Day Quilt, which was created by a collective of over 300 people including students from Manchester Metropolitan University in 2010.

Jenny Mabbott, Head of Collections & Engagement at the People’s History Museum, says, “2018’s banner display has been curated as a response to the Representation of the People Act of 1918 to illuminate this chapter of history and the ongoing quest for representation.  Bringing them together in this way creates a really powerful and moving experience that reminds us of the democratic journey that we are on, and the contribution that those who stand up for their ideas and beliefsmake.”

The Manchester suffragette banner will make its first public appearance at the museum in June as part of its headline exhibition for 2018; Represent! Voices 100 Years On (2 June 2018 to 3 February 2019).  Discovered in a charity shop where it had been for over ten years until it became a part of the museum’s collection earlier this year, it is recognised as one of the nation’s most important suffragette banners. The banner provided the backdrop for someof Emmeline Pankhurst’s most famous speeches, including a rally in Manchester’s Heaton Park on 19 July 1908, when she spoke to a crowd of 50,000 people. Embroidered with the legend “Manchester – First in the Fight”, it was a powerful reminder in its day of the fact that the suffragette movement began in Manchester.

The banners on public display change annually, revamping over a quarter of the museum’s main galleries, and are curated to reflect the museum’s programme.  Overseeing the collection is a team that includes specialist conservators, with a studio space dedicated to caring for these large and often fragile items.  With the largest banner in the collection spanning over four metres square, the scale and drama of these fascinating banners is a truly unique experience, which brings the history of democracy to life.

Jenny van Enckevort, Senior Conservator at the People’s History Museum, says, “The spectacle of the banners is one of the unmissable aspects of a visit to the People’s History Museum and, with such a large collection, they give uswonderful storytelling opportunities. The preparation required for the banners to go on display and the work that needs to be done to those that are going back into the collections store, means that the whole process takes three to four months and the results completely transform the museum.”

The People’s History Museum is open seven days a week from 10.00am to 5.00pm, Radical Lates are on the secondThursday each month 10.00am to 8.00pm and the museum is free to enter with a suggested donation of £5.  To find out about visiting, its events programme and more, visit www.phm.org.uk.

Call out for compassionate citizens to join Manchester’s Night Heroes