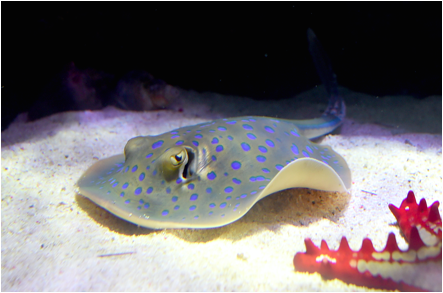 The baby ray has took to it’s new home, well like a fish takes to water, since it’s birth at the centre, in May.

Somewhat a rarity, the beautiful blue spotted creature was born an only child – Ribbontail Stingrays usually have anywhere between four and seven pups.

There was only one name fit for this new blue manc, Zabaleta; paying homage to the honorary Mancunian, and the man adored by Manchester City Fans.

Following a flurry of farewells, since the news of the of the Argentinian’s sad departure hit, Sea Life decided to jump onboard and offer a real-life tribute for city fans! In the wild the blue dots will be a warning signal to potential predators; ensuring they know the ray is venomous and can inflict a painful sting, similar to Zabaleta’s stinging tackle and defence.

Dan McLaughlan, Aquarium Curator and one of Zabaleta’s carers said: “The staff here were so excited to see a Blue Spotted Stingray had been born at the centre, from day one we noticed he was large in size, probably around 50% bigger than the average baby ray.

“We decided to name him after the much-loved football player, after seeing city fans declare their admiration for the departing right-back, and of course because of his blue markings!

“Sea Life is committed to its ethos Breed Rescue and Protect

meaning we’ve expertly developed a system of care that draws on decades of collective experience from our marine biologists. By sharing the wonder and beauty of our oceans, and, of course, baby Zabaleta; we hope you’ll learn to love them as much as we do.

“He’s quite shy at the moment, which is quite common of juvenile rays – so come and say hello and help bring him out of his shell!”

Oldham’s all booked up