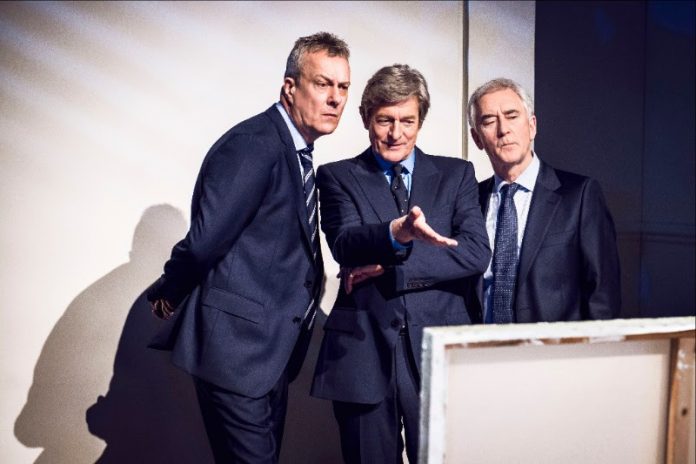 The production will star Nigel Havers, Denis Lawson and Stephen Tompkinson as Serge, Marc and Ivan respectively.  The tour will visit The Lowry from Mon 26 – Sat 31 March.

David Pugh said, “It is twenty years since Dafydd  and I first produced the comedy masterpiece ART in the West End, and the original post-London tour played for 78 weeks.  This time, we want to break our own record; in fact, we want to play as many theatres as Sir Ken Dodd has played in his wonderful career, and with this marvellous cast, we think we have every chance!”

Nigel Havers’ films include Chariots of Fire, A Passage to India, Empire of the Sun and The Whistle Blower.  He has starred in many television productions, including The Charmer, Dangerfield, Manchild, and, more recently, the hit US series Brothers and Sisters, Lewis Archer in Coronation Street, Benidorm and Lord Hepworth in Downton Abbey.  His numerous theatre work includes The Importance of Being Earnest and Harold Pinter’s Family Voices, both directed by Sir Peter Hall for the National Theatre, Richard II and Man and Superman for the RSC, the hugely successful touring productions of Rebecca and Alan Bennett’s Single Spies.

Denis Lawson is known for his roles as John Jarndyce in the BBC’s adaptation of Bleak House, for which he was nominated for an EMMY award, and as DI Steve McAndrew in BBC1’s hit series New Tricks.  In film, his notable credits include the roles of Gordon Urquhart in the film Local Hero and Wedge Antilles in the original Star Wars trilogy.  On stage, he won an Olivier Award for Best Actor in a Musical for his performance as Jim Lancastar in Mr Cinders at the Fortune Theatre, and he was nominated for an Olivier for his performance as George in La Cages Aux Folles at the Playhouse Theatre.

Stephen Tompkinson’s television credits include five series of DCI Banks, four series of Trollied, seven series of Wild at Heart, six series of Drop the Dead Donkey (British Comedy Award Winner for Best TV Comedy Actor) and three series of Ballykissangel, and his films include Phil in Brassed Off.  His theatre work includes Spamalot, Rattle of a Simple Man and Arsenic and Old Lace in the West End, Cloaca (Old Vic) and Tartuffe (National Tour).

Homes for Heroes A Manchester Journey