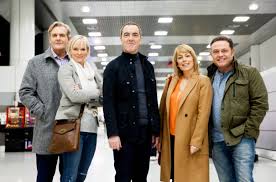 Cold Feet star John Thomson has confirmed that the show will return in September for new series, it’s eighth.

It returned to our screens last year after an absence of thirteen years.

Thomson gave away the secret when he confirmed the launch date of the next series on today’s Loose Women.
The actor also revealed the show would start again on September 11th.

The next series of the show was revealed just weeks after the successful comeback aired when ITV’s director of television, Kevin Lygo said:

“It’s with some trepidation that you return to much-loved shows, but Mike Bullen’s contemporary take on the five friends and their lives has been a wonderful thing, with every bit of the warmth, humour, emotion and chemistry that makes Cold Feet such a special, and hugely enjoyable drama.

The eight part series began filming in Manchester in March 2017, with the show’s original writer Mike Bullen once again at the helm.

The Osmonds: A New Musical Comes to Manchester