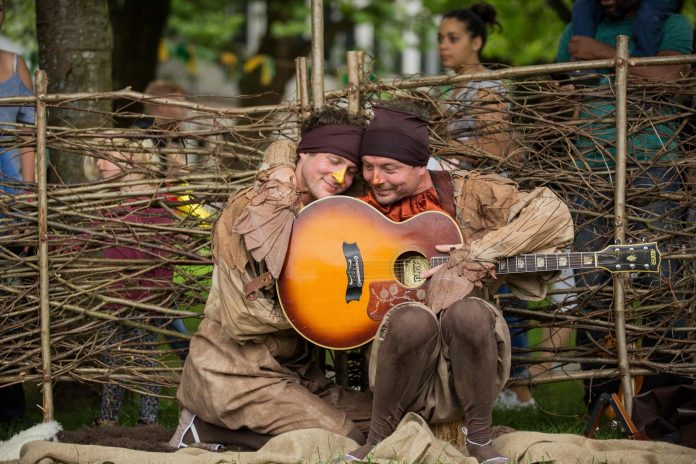 Waterside launch a brand new ten day summer programme from July 21st, bursting with experiential performance, music and events to challenge visitors of all ages to see things differently. A wonderland of activity and theatre will delight audiences both in and outside Trafford’s buzzing arts venue in Sale.

Refract:17 runs from Friday 21 to Sunday 30 July, bringing together a carefully curated programme jilted from convention. Highlights include performances inside a giant bird’s nest and inspirational theatre on a trampoline, thought-provoking and intimate shows inside a static caravan and interactive gaming on a mega scale.

Complementing the theatre offering is a series of genre-defining live music gigs from acclaimed artists and festival favourites. Salford powerhouse Ren Harvieu, with her breathtaking vocals, is no stranger to the Manchester music scene, and has appeared on Later with Jools Holland and performed with the BBC Philharmonic Orchestra.

Mind-blowing Mr Wilson’s Second Liners, fuse New Orleans jazz with 90s club classics, and come together for a special gig with Felix Hagan and the Family, who are fresh from touring with Frank Turner and complete the bill with their musical-theatre meets high glam pop set.

Bringing in the Blues, King Pleasure & The Biscuit Boys kick off Refract:17 on Friday 21 July with one rocking night. In a year which marks their 30th on the road, this internationally acclaimed band boast a phenomenal career that includes opening for B.B. King, Cab Calloway and His Orchestra, Ray Charles, and tours with the Blues Brothers Band.

For the traditional music lovers – but with a twist- exceptional all-female band The Shee showcase their powerful and emotional vocal range and instrumental prowess this summer with a one off gig that even promises a spot of clog dancing amidst the Gaelic ballads and hypnotic riffs. And if this is not enough to get your musical taste buds tingling try virtuoso Spanish guitarist Eduardo Niebla, or BBC Radio 2 Folk Award Winners The Demon Barbers who fuse disco with folk.

Refract:17 showcases something a little different for little people too. Join us outside for a squawking adventure inside a giant bird’s nest. Flit, Flap, Fly is bursting with live music, audience participation and birdsong as it follows a young bird’s frantic and funny journey towards independence. If flying is not your thing, how about a spot of jumping? Anyday is a trampoline based theatrical performance telling a charming and comic tale complete with clangs, boings and unbearable hope to make our spirits soar. And indeed if you prefer your theatre a tad more static but equally as inventive and entertaining, we have a family sing-a-long with Nick Cope’s Family Songbook, musical vegetables combined with puppetry in the hilarious adventure of Goblin’s Peter and The Wolf and seasonal adventures for tiny tots in Aleena’s Garden.

Teens reluctant to leave home without gadgets or, heaven forebid, without access to the internet, are in for a night out like no other with WiFi Wars. Not only are mobiles and tablets welcome, they are an essential part of this live and interactive comedy game show complete with prizes! In Stuff, Cirque du Soleil clown Sean Kempton, mixes mime, clowning and comedy in this playful and physical show about love; whilst the equally physical and enchanting Melancholy, fuses animation and puppetry in this poignant tale of one man as he treads the fine line between genius and insanity. Completing this creative, cultural line for older kids, is Mobile. Part theatre and part life lesson about class in modern Britain, this intimate, visual and powerful show is staged inside a caravan – exploring our sense of home, belonging aspiration and the realities of social mobility.

BBC comedy stalwart Jan Ravens comes to Refract:17 with a preview of her brand new Edinburgh Fringe Show, as well as comic poet genius John Hegley and award-wining comic Andy Kirkpatrick. Other Refract:17 delights include Dylan Thomas’s timeless masterpiece, Under Milk Wood and Waterside faves Comedysportz, plus drop in activities for all throughout the ten days.

Darren Adams, Arts Centre Manager comments: “We are absolutely thrilled to present this eclectic and exciting ten day event, with many acts and performers new to the venue. We want to challenge our loyal audiences, whilst inviting new audiences to see how our vibrant building and all of its spaces can be used in innovative, surprising and creative ways. Refract:17 offers something for all ages and all tastes as visitors can embrace the obscure and the quirky in order to see things differently this summer at Waterside.”

Waterside are calling Refract buddies to join their free membership scheme! Refraction will offer pass holders a host of discounted tickets, drinks offers and unique opportunities during the ten days. More information is available at refract.org.uk/refraction

Home are presenting a range of events for Black History Month